Serbian Prime Minister Aleksandar Vučić said on Sunday, 18th September, that Serbia’s public debt in the first eight months of this year was reduced by 610 million EUR and it currently stands at 71.9% of the national GDP. He also said that the country’s economic growth this year would be the highest out of all of the countries in this part of the Balkans.

In an interview for RTS, Vučić said that the anticipated share of public debt in the GDP this year was between 78% and 79%. As he explained, the public debt was reduced by deleveraging 410 million EUR plus 200 million EUR on the account of the fluctuations in the US Dollar and Euro exchange rates.

According to Vučić, the surplus in Serbian budget currently stands at 35 billion Dinars while the country’s economic growth in the first six months of this year was 2.9%.

– Serbia is going to have the biggest economic growth in this part of the Balkans. For the first time, we have recorded surplus in trading with the countries of the former Yugoslavia, except Slovenia. Our export is 4.5% higher than our import – Vučić pointed out.

The Prime Minister underlined that Serbia could compete with other countries economy-wise because in the following year its economic growth would be at least 3% with large investments coming from abroad, mainly from China and the European countries.

– A 3% annual growth translates into approximately 1.1 billion EUR worth of added value which is how much we can borrow without affecting the public debt / GDP ratio. We can also increase civil servant salaries and pensions – Vučić said in an interview for RTS.

He reminded that the minimum wage went up by 7.43% which means that the lowest salaries would grow by at least 8%.

Vučić expects 10% more tourists to visit Serbia next year as a result of a new publication about the country’s tourist potential that can be bought in book stores worldwide. He also said that the government distributed 46,000 tourist vouchers this year. 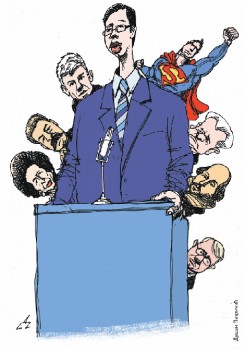