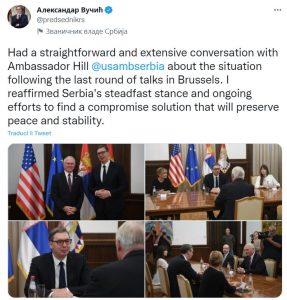 Vučić wrote on Twitter that he had a “concrete and substantive conversation” with Hill about the situation after the last round of talks in Brussels.

“I reiterated the consistent position of Serbia, which continues to make every effort to find a compromise solution, in order to maintain peace and stability,” Vučić pointed out.

President Vučić and Kosovo Prime Minister Aljbin Kurti met on August 18 in Brussels to discuss the announced re-registration of license plates and documents for Serbs in Kosovo. During the talks, no agreement was reached on these issues.