Washington-based political analyst Obrad Kesic talks about the tremors following Donald Trump’s electoral win, his future cooperation with Moscow and the new ‘understanding’ of the Balkans.

“It is important to recognize that Donald Trump’s win at the presidential election is an exceptionally important moment for the U.S. foreign policy and the world which we thought we understood. Now, we have to re-examine everything because the world can change very quickly. In the next ten months to a year, the U.S. could drastically change its attitude particularly towards Russia which opens up opportunities for Serbia and the Republic of Srpska”.

This is what a Washington-based political analyst, Obrad Kesic says in an interview for the Vecernje Novosti while describing the atmosphere in the American capital as “tense”. The elite are in shock, the media are in shock, the so-called experts are in shock – Kesic adds. However, the majority of the American people are not in shock. Ordinary people of Serbian origin and the Republicans were absolutely sure of Trump’s win.

Ohio and Pennsylvania were crucial for Donald Trump’s victory and these are the states where most Serbs in the U.S. live. What kind of atmosphere prevailed among them?

Our people were absolutely sure that they were voting for the next U.S. president and everybody stayed awake until early morning hours to see the results. Serbs are a tight-knit community here and because of the negative image that Hillary and Bill Clinton have in this community, over 90% of them voted for Donald Trump, including the Democrats. Some Democrats refrained voting for Trump and they also did not vote for Clinton. Only 5% of our people voted for Hillary.

Do you think that such a strong confidence in Trump can be translated into realistic expectations that the relations between the U.S. and Serbia will somewhat improve?

There are three very strong indicators that point in that direction. The first one is that Rudy Giuliani, who knows Serbia very well and has a good opinion about the Serbian Prime Minister, will play the leading role in Trump’s administration. They only thing that could cast a small shadow is his recent appearance in the Clinton Foundation which Trump’s administration is adamant to comb through with the Department of Justice. The second indicator is the well-known fact that most Serbs in America voted for Trump and even the U.S. media reported on this. Last but not least, Trump’s closes foreign policy associates, like Ambassador John Bolton, have been very critical of the aggressive U.S. policy of conditioning Serbia and the Republic of Srpska. General Michael Flynn will also be appointed to a high political function and he is one of the biggest critics of America needlessly meddling into the Balkan wars, diminishing the preparedness of the U.S. military and opening the door for terrorists to come to Europe and subsequently attack America on September 11th. So, there are people in Trump’s administration who are not obsessed with wars, or trying to figure out who are the good and who are the bad guys, but are rather more interested in upholding American interests. They have been analyzing the trajectory of the American involvement in civil wars and America sometimes picking the wrong side.

Do you anticipate changes regarding the Kosovo issue?

Serbs were against Hillary Clinton with the same zeal as the Albanians and Bosniaks were for her. This will certainly hinder the future relations between Sarajevo, Tirana and Pristina on one side, and Washington, on the other. There is a list of people who have been working against Trump, criticizing and insulting him. This list extends to the rest of the world too. It includes people like mayors of London and Paris, the former president of Mexico, and the Albanian PM Edi Rama who called Trump “a fool”.

Does this mean that that the attitude towards the Republic of Srpska could change too?

There are indications that there is a lot more understanding for the Republic of Srpska now and that serious talks are underway of getting Bosnia and Herzegovina out of crisis. We have also suggested the closing of the High Representative’s office, which is one of the key driving forces behind the crisis.

Obama’s slogan was all about changes and, it seems, that Trump is making some. Do you agree?

People are frustrated. The number of people who are not looking for a job at all has grown because they have become hopeless. At the end of Obama’s second term, 1% of the rich in America have become even richer. He failed to keep one of the most important promises of a more equal distribution of wealth. America has had the slowest economic growth since the World War II while better paid jobs are outsourced to other countries. This frustration is the key to understanding what the people voted for – for changes and against Hillary.

Why did the support, including the financial one, which Hillary Clinton received from celebrities and the society’s elite fail to secure her the victory?

Out of all the Democrats, the Clintons were the biggest thorn in the Republican eye. The Clintons have been in politics for 30 years, they got wealthy as a result of it while bragging of never having to actually run a business to earn money. This is what bothered the electorate a lot. Bill Clinton is the wealthiest former president in the modern history of the U.S. while Hillary is her own worst enemy. She appears cold, calculated and devoid of charisma.

Trump’s views have caused a real havoc in the world because everything is now going to be turned upside down.

We really shouldn’t take Trump’s spontaneous statements about nuclear weapons, breaking off the agreement with Iran, and deportations seriously. He corrected himself quite quickly. However, the things he reiterated many times during his campaign should be taken seriously. He promised three things. The first is a complete normalization of relations with Russia and building a partnership with Moscow in regard to the issues relating to the Middle East, Syria, relations with China and policy towards Europe. The second thing is re-examining America’s attitude towards NATO, which has been untouchable until now, bearing in mind that U.S. has been unhappy with the allies for a long time because of their inadequate defence budgets. The third point, which is especially important for Serbia, is the announcement that new trade agreements will be concluded with regions worldwide.


Although he announces a turning point in the American-Russian relations, Trump is very critical of the EU.

Europe doesn’t top Trump’s list of priorities when it comes to foreign policy. He sees Europe as a “sick patient of the 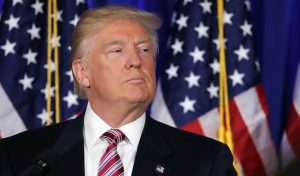 Western world” because of the migrants, economic problems, confrontation with Russia, supporting the war in Syria, and bringing down the government in Libya which, according to Trump, resulted in growing threat from the radical Islam. If the British and the Germans were to play the main role in setting the criteria regarding the American-Russian relations, this could additionally undermine those relations and cause confrontation with the new U.S. administration. However, if Europe plays its cards right, it could find its own interest in the improved relations between Washington and Moscow.

Does Trump enjoy some kind of backstage support so that he can make such bold moves?

Trump has demonstrated an exceptional determination in building better relations with the Russians. I have never seen a U.S. presidential candidate with this much courage when it comes to foreign policy. When a man has as much courage as he does, he is either completely naïve or owes nothing to the establishment. The fact remains that the new U.S. president has never held a political function and hence owes nothing to the establishment.

Can he realize everything he has envisaged without the support of the establishment you are talking about?

Over 70% of the U.S. veterans showed their support for Trump. The Pentagon supports him because the U.S. military, which has been involved in armed conflicts worldwide since 2001, is also going through a crisis. There is a desire to finally put an end to all these wars. The military commanders have testified in the Congress that they were not able to engage in two wars against two big armies at the same time. This talks about the crisis in the American military. Trump enjoys the support of the military establishment too. As far as the intelligence services go, they are always closely connected to the military. However, there is a division in the U.S. intelligence too because it was the Clintons who had been building their own establishment, particularly in the State Department.

Do you think that Trump is going to do a big “cleanup” now?

Trump’s associates have been compiling a list of enemies, but Trump himself has two problems. He is going to be appointed president although, numerically speaking, more people have a negative than positive opinion about him. Even 1/4 of his voters are not too fond of him so he will have to deal with a huge challenge of becoming an authority and being efficient. The second problem lies in the Congress where he will have to deal with his own party. The first test would be when the time to re-appoint Paul Ryan as the Speaker of the U.S. House of Representatives comes. If Trumps supported him, that would mean that he was compromising with the establishment. If he doesn’t support him, he is opposing his own party with uncertain results.

One of the main objections against Trump is that he is unpredictable and, as such, inadequate to be the Chief Commander of the U. S. army and in charge of the ‘nuclear briefcase’?

One man cannot spontaneously decide to use nuclear weapons. That exists only in movies. There are procedures in place that control the entire system. This doesn’t mean that he could not use less dangerous nuclear weapons. Some military analysts say that such possibility could serve as a serious warning to terrorists.

There have been hints that two Americans of Serbian origin will be in Trump’s team.

These two are not that known to the general public, but they are quite known to the people who have been closely following their successful careers. These two individuals have very good connections with the people from the Republican Party who supported Trump politically. I think that there is a good chance of at least one of them being appointed to an important position in Trump’s new administration.