“Brussels wants for the Western Balkan countries to join the EU, and one of the key reasons for this is to prevent the brain drain”, said the EU Enlargement Commissioner, Johannes Hahn at the Trieste Summit.

Speaking at the summit, attended by the six Western Balkan leaders that took place under the framework of the Berlin Process, Hahn said that that would reduce the tensions from the past. He also underlined the importance that the Western Balkan region and its 20 million consumers had for the EU economy, and added that the external trade between the EU and the Western Balkan countries amounted to 44 billion EUR in the last 10 years.

Hahn also said that the EU planned on investing around a billion euros in the region in the next few years, and announced the signing of the Transport Treaty that would connect the Western Balkan countries to the transport legislation of the European Union.

“We are going to sign agreements on an array of projects in the areas of transport and energy worth about 200 million EUR which will, in turn, activate total investments of around 540 million EUR. What is even more important is that we are going to create prerequisites for creation of a new regional economic space that would facilitate the trade between the countries in the region which, although not fully developed, has a lot of potential”, Hahn added.

One of the main tasks of the Summit was boosting regional cooperation and networking as the crucial element for expediting the EU integration process in the Western Balkans and strengthening of the economic cooperation primarily in the SME, IT and science sectors.

Deputy PM of Serbia and the Minister of Construction, Transport and Infrastructure, Zorana Mihajlovic said that concluding the Transport Treaty created a great opportunity for all countries signatories to boost investments in transport infrastructure and form a single market, as well as improve the traffic safety.

“This is why we need to develop infrastructure and network with other regional countries. Together we have to come up with the ways of implementing the EU transport laws and become a competitive transport market, in addition to investing more in infrastructure”, Mihajlovic said and reiterated that the regional countries had to work together on removing non-physical barriers that prevent fast movement of goods at border crossings.

“The EU’s financial assistance of 220 million EUR for the Western Balkan countries is of exceptional importance for SMEs in Serbia and the region”, said the president of the Serbian Chamber of Commerce, Marko Cadez and added: “It is also equally important that there will be the Standing Secretariat of the Chamber Investment Forum with the headquarters in Trieste. When you combine this financial assistance with our activities, i.e. linking concrete companies with concrete business deals, we are going to create a much greater impact because we are going to have an easier access to this capital”.The Secretariat is going to be a sort of a one-stop-shop for the regional companies and their existing and future business partners.

During the panel focused on the development of SMEs in the Western Balkans the director of NALED (National Alliance for Local Economic Development) Violeta Jovanovic has presented the initiative for istitutionalization of Business Friendly Certificate Network in South East Europe. The regional platform for Business friendly environment (BFE SEE), sustained by country governments and line ministries as founders and signatories of the Regional BFE platform, will strengthen the network and secure institutional support for further exchange and harmonization of business conditions across the SEE region, in particular in the fields of costruction permits, grey economy, public-private partnerships, online fiscalization, investment promotion and attraction. 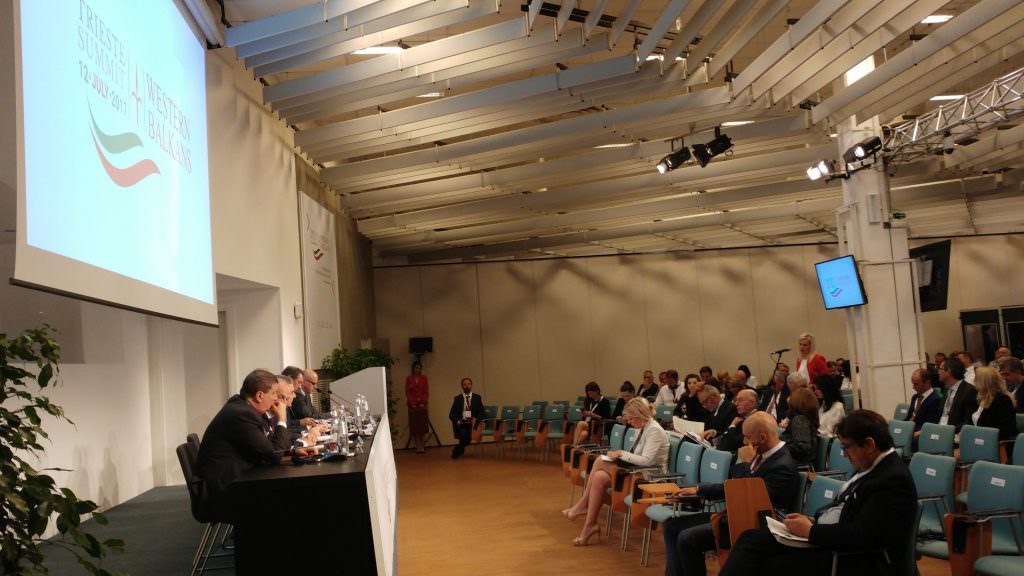 The EIB is also prepared to secure the funds required to encourage economic growth and productivity, with particular focus on infrastructure and development projects, Scannapieco said, according to Tanjug.

The Serbian government said in a statement that Brnabic “stressed the importance of good cooperation with the EIB, especially for infrastructure projects, both for those who are current and those to be launched, citing four clinic centers in Serbia as an example.”

Also in Trieste today, Serbian Finance Minister, Dusan Vujovic and Scannapieco signed the final contract to reconstruction and modernization of four clinical centers in Serbia – in Belgrade, Novi Sad, Nis and Kragujevac, for which the bank approved a 25-year EUR 50 million loan.