“Today, more than ever, the European Union needs to rediscover its core values, to enhance the richness of its cultural diversity and the ties that unite its peoples, as well as to put them at the service of the resurgence of a more just and better Europe.”

With these words, the Vice Chairwoman of the Our Europe 2017 Ward, Irina Subotić from the University of Belgrade, handed the award to the Museo degli Usi e Costumi della Gente Trentina from San Michele all’Adige (Trento, Italy). The Museum was given The European Union Prize for Cultural Heritage / Our Europe Award 2017 (in the ‘Research’ category) for the project of investigation, study and research of the ancient carnival rituals and winter masks of the Alpine and European rural world, titled Carnevale re d’ Europe / Carnival King of Europe. 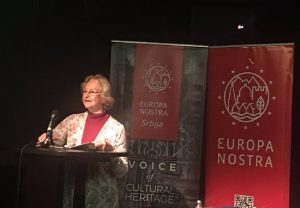 Drafted in 2007, following the initiative of the Trento Museum, Giovanni Kezich, the project was approved and financial supported over four years of its implementation thanks to the contribution from the European Commission’s Culture Programme, and has directly involved ethnographic museums in eight European countries (Spain, France, Poland, Slovenia, Croatia, Macedonia, Bulgaria and Romania) as full-fledged partners, i.e. the museums from the Iberian peninsula, the Central and Northern Europe, the Western Balkans region and the Danube region. The project activities relating to documentation and dissemination took place between 2012 and 2014, in collaboration of the Italian Institute of Culture in Belgrade. The research field was later expanded to include ethnographic museums in Switzerland, Austria, the United Kingdom, Belgium and Greece.

The local award ceremony took place in the impressive Augustinian medieval convent of San Michele all’Adige, home of the Trentino Museum, at the end of the traditional theatre and music autumn season in Rotaliana. In addition to European and Italian authorities, several project leaders from the ethnographic museums in Innsbruck, Warsaw, Zagreb and Skopje contributed to the project. On this occasion and in subsequent meetings, the director of the Trentino Museum, Giovanni Kezich has highlighted, illustrated and argued that ethnography can play an important role in “explaining Europe to old and new Europeans” through “research and revision of traditions, values and common languages of the past. “

The European award, given to the “Carnival of Europe” project of the Trentino Museum, recognizes the project’s purpose, as stated by the jury, in the “European dimension of ethnographic and historical research” which has “involved and studied the rituals of almost one hundred winter carnivals in fourteen European fourteen countries and their special and archaic relationship with the world of agriculture and the rites of fertility.” Focusing on the European tradition of carnivals, the research group has “highlighted the origins and analogies that emerge in the winter and carnival masks, with rites and values ​​rooted in the centuries-long tradition, that foster dialogue, community solidarity, cooperation and the strengthening of local identity “. The vastness of the field of research has shown that the people of Europe continue to express, revise and renew their traditions even today, while many rites and values ​​belonging to a common cultural foundation are rooted in cultural foundations and languages, which make carnivals one of the oldest popular events promoting European cultural identity.

In order to  achieve the project objectives, the Trentino Museum has put in place various strategies, including field research and film documentation. Every carnival was recorded from dawn to dusk on the day of its taking place, and the results were disseminated through itinerant exhibitions, educational activities, the launch of a website, film screenings, seminars and conferences.

The jury also underlined that “the relevant results were achieved in terms of analysis, study, training, awareness-raising, documentation and investigations based on collaborations with local experts of the traditions examined”. They commended the traveling exhibitions, conferences and educational activities organized in many countries, articles published in specialized journals, and Giovanni Kezich’s award-winning book “Carnival of Europe”.

In terms of traditional European carnivals, the project by the Trentino Museum has shed the light on numerous similarities, linked to traditions common to European nations, and “provided an example of how we can valorise and preserve the intangible and popular heritage of Europe”, underlined the Vice-Chairwoman of the Our Europe Award, Irina Subotić, at the end of her speech. 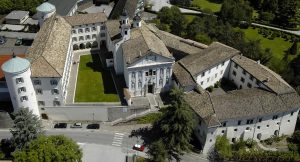 In 2018, the Museo degli Usi e Costumi della Gente Trentina, founded by the Trentino ethnographer and essayist Giuseppe Šebesta, will celebrate its 50th anniversary. It will also celebrate the launch of the new carnival dedicated to “the winter rites of Trentino with an opening to the ancient masked rites of the Alpine and European rural world”, to coincide with “2018 – The Year of European Cultural Heritage”, which slogan is “Our Cultural Heritage: Where the Past Meets the Future”.

former Director of the Italian cultural institutes in Brussels and Belgrade