We are onto our fourth article in our zero-emission tourism series, and this one is all about fun in the summer.

Serbia comes alive in summer, and every month there are dozens of events to see, participate in and enjoy. Most of them are outdoors, and there is something for everyone’s taste. If you are often water-bound and you are at your most relaxed near a body of water, we have a regatta that you simply have to join in. For all you music aficionados, July is the time for the biggest music festival in Southeast Europe. And for the people who would like to learn more about the Serbian folklore, tradition and customs, we have a unique event that will take you back in time.

1. The Drina Regatta in Bajina Bašta – This is probably the merriest and most exciting regatta in Serbia because it takes place on the river of Drina, dubbed as “emerald beauty” due to its unusually green colour, and secondly because over 20,000 rafting enthusiasts participate in it. The Drina River forms a natural border between Serbia and Bosnia and Herzegovina and is some 170km south-west from Belgrade. The river is actually created by the confluence of two other, equally beautiful, rivers – the Tara and the Piva. There are many gorges strewn across the river with the longest one being the 38km long Klotijevačka Gorge. 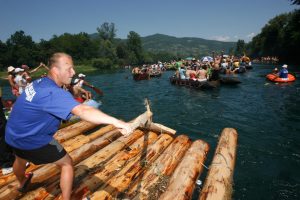 As for the regatta, this year it takes place between 19th and 23rd July, and it is held in honour of the 19th century raftsmen who braved the perilous waters of the Drina, and were admired for their rafting skills, courage and daredevil attitude. The long rafting tradition here was interrupted with the construction of the first hydro-power plant, and the famous Drina raftsmen were forced to leave the river and seek employment elsewhere.

The regatta’s programme is a mixture of concerts, fish chowder cooking competitions, exhibition jumps off the bridge in Rača, souvenir fairs, and, of course, the rafting itself. You don’t have to be a skilled raftsman, or to have state-of-the-art vessel to participate in the regatta. Just bring something that will keep you afloat long enough, and you’ll be good to go. You would need to register your vessel with the organizers though, if you want to participate in the regatta and, of course, there are certain rules you would have to adhere to. These include paying attention to the regatta’s captain who will be giving you instructions throughout, not having more than 20 people on board your vessel, and not drinking alcohol. Albeit, the last rule is often bent.

2.EXIT Festival – Although the EXIT Festival has reached an iconic status, and there are very few unknowns about it, the fact remains that this is one of the biggest, wildest and the most thrilling festivals you’ll ever attend. Take, for instance, its location – the 17th century Petrovaradin Fortress in Novi Sad, overlooking the River Danube and long sandy beaches.

Then there is a sheer number of performers – this year, there will be over 300 of them including Rag’n’Bone Man, The Killers, Liam Gallagher, Roisin Murphy, Jason Derulo, Hardwell, and Jeff Mills. EXIT has a total of nine stages that cater to different musical preferences of the audiences – the Main Stage (where usually the biggest stars perform), the Latino Stage, the Disco Zone, the Gaia Trance Stage, the Explosive Stage, the Future Shock Stage and others. 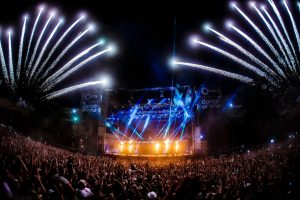 Last but not least, there are the visitors – people from all over the world (over 190,000 of them from 40 countries), of all ages, and of all walks of life who all here for a single reason – to enjoy the music and have the best possible time.

This year’s festival will take place from 5th to 9th July at, as we have mentioned before, Petrovaradin Fortress. The official slogan of EXIT 2017 is „The Summer of Love“ and the festival is dedicated to the eponymous time period in the United States in 1967 when the first real music festivals started emerging. First it was Monterey, and two years later, came the legendary Woodstock.

3.The Rajac Scythe Festival – This unique event is a journey back in time when Serbia was the land of diligent farmers who used the old-fashioned tools like scythe to mow the meadows that would later be used to feed their farm animals. The beginning and the end of the mowing season was always celebrated with the traditional music and good food. 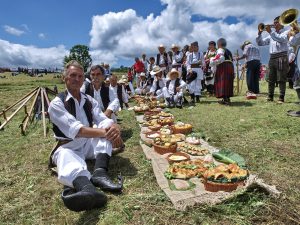 The first ever Rajac Scythe Festival took place in 1892, and today, apart from hosting a mowing competition, the festival also showcases the Serbian folk dances and music, national costumes, old agricultural tools and machinery, the traditional food, and numerous 19th century customs of rural Serbia. Mowers from all over the world, including Great Britain, Iceland, Romania, Russia, The Netherlands, Norway, Hungary, Slovenia and Montenegro, gather at the festival to participate in the mowing competition. And they are not the only one taking part in the festival – there are also water bearers, trumpeters and toastmasters.

Each year, the festival is frequented by around 10,000 visitors.

The Rajac Scythe Festival takes place between 14th and 16th July on the Rajac Mountain, near the town of Ljig (some 80km south of Belgrade).