In the game of Russian roulette with the Western Balkans, the game is played on several tables; only one gun is loaded, but none of the players knows which one and when it will be loaded. The players at the table bear surnames such as Dodik, Vucic, Kurti, Izetbegovic, Djukanovic and Plenkovic, supported by various helpers, servants, family members. 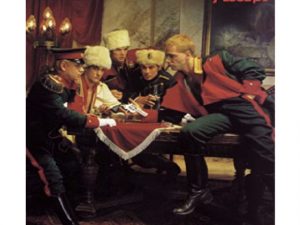 es not imply a greater probability that one of them will be loaded, just as, conversely, fewer guns in the game do not guarantee lower mortality of the game. The final rule of the game is the following – whoever uses a loaded gun will condemn not only the victim but also himself and all other players to irreparable ruin.

Why then play such a deadly game? As anyone who has gambled heavily knows, the gambler’s pleasure does not lie in the excitement of possible winnings, a plebeian ambition today tickled by slot machines. If anything, the true gambler is animated by anxiety about his possible ruin – gambling it all while managing to prolong the pleasure of being one step away from ruin is a feeling of extraordinary intensity. Then there are the spectators, more or less interested – some admire the courage of the gamble, others are driven by the sadistic taste for the collective catastrophe, which allows both a punishment for the stupidity of players and the illusion of an impossible palingenesis. And as it sometimes tragically happens in action films, by mistake or conspiracy, someone loads a gun with real bullets, causing fatal consequences. The fascination of the game is all there. Who will use the loaded gun? When and at which table? As always, betting is part of the game.

Well aware of the lethal risk, the players also know that this is the only game that guarantees that the spectators will be interested in them. And, beyond the mutual attitudes of defiance, they are well aware that it will not be a competitor who puts a loaded gun on the table, but one of the spectators.

It is understood that the game does not end between the various tables of Russian roulette, but extends and finds its reason among the spectators, who, from time to time, are interested in loading the weapon or foiling its lethal outcome, with roles and objectives constantly changing, so that the spectator who already triggered the apocalypse today presents himself as a ‘katechon’ and at least tries to postpone it. No one knows when the roles will change, and so, just like in every game, there are two levels, two circles of chance – the challenge is to know who will strike the lethal blow and against whom, and the challenge is also to figure out which of the spectators intends to load the weapon.

Like any game of chance, it has generated a plethora of alleged experts, advisors, observers and commentators who are supposed to explain the rules, principles, ends and outcomes of the game to the layman. These are individuals whose aims are somewhat heterogeneous: those who hope that a lethal outcome will not occur, but who certainly can do nothing to avoid it; those who have built their careers and reputations on the possibility of tragedy, and therefore get excited every time the risk of a loaded gun appearing on one of the tables increases; those who try to speed up the disaster, because afterwards, experts will have to be hired to reconstruct the game and its new protagonists.

Finally, far away from the game, the Western Balkan people fall the first victims of it, even when blanks are fired.

A new pistol has appeared on the Kosovo-Serbia ‘roulette’ table and Albin Kurti is wielding it: “I forbid the use of Serbian IDs and car number plates in Kosovo, because Kosovo’s IDs and plates are forbidden in Serbia”. Little does it matter to him that Kosovo’s independence is not recognised by 95 countries or that Kosovo does not have a seat in the UN, and so asking for reciprocity is for the Serbs a bit like asking Spaniards to change their number plates and identity cards when they enter Catalonia. It matters little to him because Kurti knows that the US and NATO are hoping to settle some unresolved issues with Putin in the Balkans thanks to his activism. The US ambassador in Belgrade, Christopher Hill, who was present in Rambouillet when the then mini-Yugoslavia was given the ultimatum ‘independent Kosovo or face bombing’ in 1999, is showing himself magnanimous and granting the Serbs a month’s extension to come to a more lenient advice. The composition of the new Serbian government will have to prove that Vucic has understood the message and the message is that it will not stop at car number plates and IDs. They are only the beginning of a process. One step at a time, that is, one forced step at a time, Serbia will sketch out and lose the Kosovo game or venture its armed forces into a trap like the one in 1999. Henry Kissinger was clear about this:

“The Rambouillet text, which called on Serbia to admit NATO troops throughout Yugoslavia, was a provocation, an excuse to start bombing. Rambouillet is not a document that an angelic Serb could have accepted. It was a terrible diplomatic document that should never have been presented in that form“.

There will soon be a Rambouillet 4.0, as the slogans of this historical phase imply: no telling-off and promises of billions of dollars to stop the Balkan “beggars” squabbling as the blustering businessman Trump thought he would do with his former envoy Robert Grenell, who is now, it seems, on the Serbian government payroll. The Democrats are working smoothly with public relations to achieve peace a yes, but either after war or after an unacceptable agreement or after both.

Many media outlets have already started to not only take the armed clash between Serbia and Kosovo for certain, but even already underway. Like self-fulfilling prophecies, various Twitter accounts are already preparing the collective psychology for an event planned by some, hoped for by others. Thus, on 1 August, Ukrainian MP Oleksiy Goncharenko tweeted that Ukraine (which does not recognize Kosovo) is ‘ready to send its troops to foil the war of aggression of Serbia, Putin’s Trojan horse country in Europe’, while Turkish nationalist writer Hussein Hai Kahveci tweeted of a war that had already begun, and the account ConflictTr has already launched the news in the cyberspace of hospitalized wounded Kosovo soldiers.  The Italian newspaper Corriere della Sera did not miss the boat too and on 3 August, published the article titled “Shivers of Music and War” on the occasion of Mahmood’s concert in Pristina.

Once Angela Merkel, who has been likened to a very cautious Auntie of the Balkans for twenty years, left the stage, Albin Kurti became aware that he must follow a more daring scheme prepared elsewhere. To this end, Kurti has already started the round of international interviews to present himself as a victim of Putin’s aims, and possibly the new martyr and idol of liberal democracies. First choice is the Italian Repubblica and the super-atlanticist Maurizio Molinari. This wasn’t a coincidence – Italy has deployed 638 carabinieri in Kosovo. It’s good to prepare the public for what may happen. Fearlessly, Kurti asserts that he represents democracy against autocracy, that Serbia is Putin’s extended arm and little more than a puppet with strings pulled by the official Moscow. Kurti speaks of 48 Serbian military bases around the border (That would be one every three kilometres!), of a very high risk of war and of perpetual phantom joint Russian-Serbian military exercises. Kurti has no interest in telling the Italians that since 2006, Serbia has held over 150 military exercises with NATO members’ armies and that the overall relationship between NATO and the Serbian army is now closer than that with the Russians.

For Repubblica, the pattern is the usual one, from the very beginning – the good guys vs the bad guys and the demonization of the victim of its journalistic campaigns, be it an Italian politician, a competitor of its owners or a foreign country. Now, for Molinari’s Repubblica, it is Serbia’s turn, and if the facts are weak, they are magnified, but if they are missing altogether, they are created. We have pointed out how pro-Russian sentiment is now stronger in Serbia than before, but assuming that the country hangs on every word that comes from Putin’s mouth is not only misleading – it’s assuming that your readers are brainless. At the present time – in 2022, a world divided into power blocs as rigid as marble and not as porous as tuff implies considering that the readers had either grown up during the Cold War or are not grown after fifth-grade school. Having ascertained the economic, often criminal, interests hiding behind the cloak of Serbian national pride in Kosovo, if there is one merit of the diplomatic action carried out by Serbia in recent years, it is precisely that of having increased the poles of its action to new subjects that were once distant, if not enemies. It would come as no surprise, for example, that Recep Tayyip Erdogan is once again being called upon to act as a great mediator between a country that has recently become Turkey’s friend and another that was historically Ottoman territory. In the same way, the great friend of the Republicans, Mohammed al Zayed after the Mid-Term elections in November, could return to the Balkans to finance a country’s stability with 1.8 million Muslims, such as Kosovo, and protect the future of a country where he has invested or channeled billions dollars, such as Serbia. Could Israeli real estate companies accept the collapse in the value of their investments in Serbia in the event of a war? China, a major investor in the region’s infrastructure, has no interest in seeing its projects fade away or bombed in a possible conflict.

Yugoslavia from 1999 was a country isolated by almost a decade of embargoes, scarred by three lost secession wars, with tens of thousands of refugees to shelter. Serbia in 2022 is a country that has built global networks, partnerships and supply chains, often with countries rivals of Russia and China, starting with the European Union. The “hole” caused by “the shot” would also swallow up what has been developed over the years. A second war on the borders of the European Union would mean the dissolution of the Europeanist construction itself, which is already barely distinguishable from Atlanticism. What was the courageous enlargement of the Union to ten Central and Eastern European countries if not a non-military response to the dramas following the dissolution of Yugoslavia and the USSR?

Russian roulette in the Balkans is attracting more interest today than ever before, and the overkill on this game has already provoked in the past decades inauspicious explosions, which still reverberate in history and people’s lives.

“Destruction awaits anyone who, answering to his vocation and fulfilling it, exerts himself within history.” (Emil Cioran, “Thinking Against Oneself”)