“Once upon a time”…. That’s how most fairy tales, anywhere in the world, begin. They also have the same, upbeat ending of “…and they lived happily ever after”. Who doesn’t like fairy tales? And what do they have to do with motorsports, and especially with the future of the automotive world?

There are many books that talk about an important role that the approach to storytelling plays in corporate communications. There are quite a few successful cases to corroborate this, especially in the business sector. In certain sectors, like tourism, we can see that there is an experiential component that plays the key role in determining how successful or unsuccessful a tourist destination will be.

But what kind of “stories” can be useful in automotive industry; the stories that are closely tied to the products which have to be sufficiently technologically innovative to generate in customers a strong desire for purchase? You only have to look at newsstands displaying magazines about cars and motorcycles to realize that many countries (Italy in particular) are inundated with numerous trade magazines which tell more “historical” than “modern” stories. At first glance, we can see that these magazines portray cars and bikes as if they were real life characters (some still alive) which, in the past, thanks to their sporting exploits, made us dream. They have remained a source of inspiration to this day!

And here lies the ”secret of heritage”: the ability to be a source of inspiration for the present and, possibly, for the future. This is, of course, a rather uncommon characteristic, which is why, for example, only certain models of vehicles were ”reinterpreted” successfully. The FIAT 500, the ‘Beetle’, the ‘Mini’ the ‘Vespa’, to name only the few most popular. Their modern versions are bestsellers in their own right, but they also have the uncanny ability to ”summon up” their glorious predecessors and therefore incite their new owners to dream again.

How does Serbia fit into this picture?

It seems that the legacy of the car manufacturer that marked the motoring history of the former Yugoslavia is somehow failing in this regard. The “return” of FIAT In Kragujevac also meant the return of the iconic 500L, now “proudly made in Serbia” but with no sentimental connection to the cars produced by Zastava Automobili back in the day.

Recently, I was privy to experiencing something that was an extraordinary part of the glorious history of car racing. When I arrived to Belgrade in 2003, I saw a film called “Nacionalna Klasa”, and I became infatuated with the story, the energy that was flowing in every scene of the film, and most of all, with the yellow and black “Fića“ that took Floyd (played by Dragan Nikolic) to the finish line. 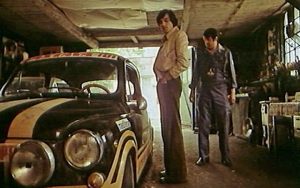 Immediately, I started searching for the place where I can find such Fića to drive, even if it meant going to the Zastava Museum. I was struck by the fact that, despite Fića being still so popular in the collective imagination of the countries that made the former Yugoslavia, no-one has ever designed the exact replica, or at least open a museum (even a section in one) dedicated to this glorious Yugoslav auto-brand. I searched for it from Skopje to Ljubljana, from south to north, and found nothing. Then, as soon as the opportunity arose, I purchased a Fića from the same period like the one in the film, and entrusted a skillful craftsman with renovating it. He participated several times in the Nacionalna Klasa race with excellent results so I asked him to turn my Fića into an exact replica of the one that was used at that time. The final result was amazing – I gave a new lease of life to a legend! 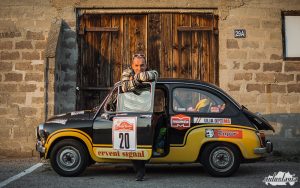 In the past two years, I enjoyed taking my Fića around Europe to see how well it did – fairs, meetings, rallies, festivals… The Floyd Fića (as it was unanimously renamed) has been depopulated in a “part” of Europe, and because nobody has seen or reviewed the Nacionalna Klasa film. It was a little known Yugoslav story, told from the perspective of a driver of a racing machine which had a whole different flavour.

As for my Fića, it was fixed! It worked! It was fun to drive! And it helped with generating a new form of employment. In addition to the car mechanic who worked on the car and breathed a new life into it, there was also a video-maker who followed me around and filmed everything. With the help of a web designer we then posted the short film on our website. And these are young people from Serbia! What is the secret? An insane curiosity for research and re-telling of “never ending good stories”!

This is just one example of how much there is to do in Serbia in order to rediscover and relive the interesting stories from the past, without the bitter aftertaste of nostalgia, which really does not help much, but with the healthy and intelligent desire to create the present and a much more beautiful future.

The first place to do this is the International Automobile Fair in Belgrade, which will take place from 24th March 24 to 2nd April 2 this year, and where yours truly will demonstrate how investing in heritage is the best way to guarantee a future for this growing sector. It has many interesting jobs for seasoned professionals, and especially for those who are stilled fired up about cars.

P.S. I will continue to take the Floyd Fića around Europe and continue telling the good stories about the time and places in which it was created. I decided to dedicate it to the memory of three people who have passed away, but who inspired me the most to go on this adventure – the genius Nikola Tesla, the talented Dragan Nikolic and his passion for the mechanics, and my father.

* Giorgio Andrian is a geographer and an UNESCO expert.