It is the Indian version of the Astra Zeneca vaccine, produced by the Serum Institute of India, the world’s largest manufacturer of vaccines, based in the city of Pune.

Thanks to the “Indian” vaccine, this weekend, Serbia has been the scene of a sort of biblical exodus in search of the holy grail of immunization that has paralyzed the freeway crossings from North Macedonia, Bosnia, Croatia and even Hungary. 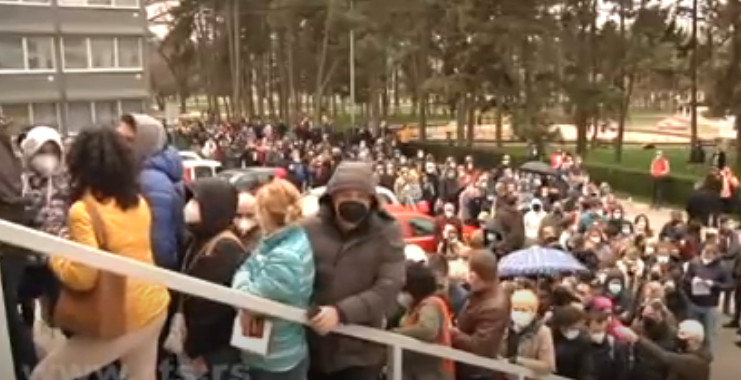 The influx has created significant problems in Niš, where hundreds of North Macedonian citizens have flocked to the Čair vaccination point without having previously registering themselves. Thousands of people have also been arriving by car from Bosnia since early Saturday morning without having registered themselves for vaccination at the relevant web portal. There were also very long queues and traffic jams in front of the inoculation point in Belgrade (the building of the Belgrade Fair).

But never have these queues and this chaos been more pleasing to the country’s political leadership. Yesterday evening, it was triumphantly announced that 22,000 foreigners had been vaccinated, a generous gesture that no European country can boast of today. And it matters little that this overabundance of the “Indian” Astra Zeneca vaccine has been a result of the fear that quite a few people in Serbia have regarding the safety of the vaccine produced by the Anglo-Swedish pharmaceutical company – the risk of having to throw them away because they are no longer storable has been presented to the international media as a gesture of a generous and welcoming country.

Never has a communication campaign, or rather a soft power campaign, has cost less a country. At an average price of the “Indian” Astra Zeneca vaccine of $3.40, 22,000 vaccinations have cost less than $ 100,000 (excluding the fixed costs of medical personnel employed) to earn the gratitude and admiration of many more thousands of people throughout the region and beyond, since there were thousands of more or less privileged managers and foreign business people in Serbia vaccinated in the weeks before with the Pfizer/BioNTech vaccine through various channels.

A stupidly nationalist country would have kept the vaccines for itself even with the risk of having them expire (“it is our taxpayers’ money, therefore it should be spent on us” – a phrase that we, Italians, know well). On the contrary, an intelligently nationalist country has used the risk as an opportunity to gain consensus in public opinion in neighbouring countries. For this, we must give credit to those who are managing the vaccination campaign and communication. While the number of people hospitalized with the COVID-19 virus exceeds 7,000, the number of patients in intensive care has almost doubled in less than a month, and last Friday, there was a record of 5,224 people who tested positive on the virus out of a total of 17,436 tested that day, all over Europe people are talking about the successes in the vaccination process and the rush of foreigners to get vaccinated in Serbia and not about a mounting health emergency.

According to Joseph S. Nye Jr, the soft power of a country is based on three aspects: popular culture (mass media, sports, gastronomy, for example), political values (when the country lives up to those values it promotes), and the country’s domestic and foreign policies. Vaccine policy falls into the third case. Donations to the various countries in the region, free vaccinations, messages of openness and welcoming attitude, the next export batch of the Sputnik V vaccine – these are all pieces of a great communication campaign that is developing international consensus around Aleksandar Vučić and, as a result, allowing him to manage from a position of strength amidst the scandals and accusations of recent weeks. Although these are radically different plans, how can the European Union, mortified by the poor management of the vaccine campaign, criticize an autocrat who has shown imagination, intuition, decision-making and speed of execution in vaccination (to quote, with a hint of irony, the legendary movie “Amici Miei”)? Here you build a consensus by focusing domestic and international attention on the positive elements and overshadowing critical issues, inconsistencies and abuses.

Yet, the country aims to project itself into the future. From May onward, the Torlak Institute in Belgrade will start producing the Sputnik V vaccine and at the same time, news has been circulated that vaccinated Serbs could be allowed entry into Greece also as of May this year, or return to normalcy and regional dominance, at least in the geopolitics of vaccines.

The challenge of vaccines is a geopolitical one and is not tied only to economic and political interests that are behind various international groups. It is a challenge that touches on the future reputation of the subjects of this challenge. While the Americans and the British have pushed the accelerator pedal with excellent results, while the Chinese must compensate for the image of causing damage by creating an epidemic catastrophe, the Russians, despite the reduced production capacity, are using the vaccine to force the European Union to approve it and thus deny the sanctions still in place. Serbia plays its game on two levels – on the one hand, there is the regional predominance, this time thanks to building the current which also changes the political balance of power with the various countries and on the other, there is the relationship with the EU, which is weakened internally by the management of the pandemic crisis and the EU’s poor ability to negotiate and impose its positions to the Serbian leader who today can boast not only an overwhelming power at home but also boosting his image in the entire region and beyond.

The pandemic is revealing itself not only as a global sanitary crisis, but also as a political challenge in which the principles of rule of law, freedom of speech, respect for the political opposition risk being sacrificed on the altar of governmentality of the emergency.