The President of the Republic of Serbia, Aleksandar Vucic, inaugurated a new warehouse of the Labor Srb Company in Sremska Mitrovica, part of the Labor Legno Group, owned by Patrizio Dei Tos, which plan is to complete the entire production process in Serbia within a year.

The inauguration was also attended by the President of the Veneto Region, Luca Zaia, the Prime Minister of the Autonomous Province of Vojvodina, Igor Mirovic, the Ambassador of Italy to Serbia, Carlo Lo Cascio, and the Minister of Agriculture and Forestry and the former Mayor of Sremska Mitrovica, Branislav Nedimovic.

Forty people will be employed in the new facility which means that, in a year’s time, this company from Cordignano, the province of Treviso, will have had 80 employees in Serbia in total.

In his speech, Aleksandar Vucic underlined that Serbia needed not only the investments that result in a thousand or two thousand employees, but also those made by small and medium enterprises, which can boost entrepreneurial spirit on a bigger scale.

“Sometime in the future, some of the workers will open their small manufacturing companies and slowly develop a widespread business fabric. My friend Luca Zaia reminded me that the GDP of Veneto is four times that of Serbia and that 80% of it is generated by companies with less than fifteen employees. We still want other entrepreneurs from the Veneto region to come here, to teach us how to bolster entrepreneurial spirit and how to become wealthy like Northern Italy. I personally met the entire Dei Tos family, and all of them working in the family business every day”, Vucic added.

Ambassador Lo Cascio underlined that Italian companies not only wanted to come and stay in Serbia but were willing to grow in terms of investments and the capacity to create new jobs. “Economic relations are an essential pillar of our bilateral collaboration. Italy made a decision invest in political and economic terms in Serbia when other countries did not even think of it. Today the situation has changed and many business partners have come to this country. We are thankful for our foresight but also proud of being one of the first here”, Lo Cascio said and further underlined that Italy intended to be present in Serbia also in the future so that both economies could grow and become better integrated into the large European common market.

The President of the Veneto Region, Luca Zaia has commended President Vucic’s commitment to entrepreneurs: “I have no personal interest in saying this but I am glad to be able to say that Serbian citizens are lucky to have a president like Aleksandar Vucic who cares about the country and the challenges it faces “. 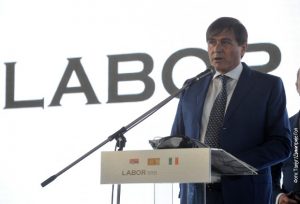 The owner of Labor Legno Group, Patrizio Dei Tos, said the following at the opening: “Today’s inauguration is the validation that we are continuing with our business direction of combining the skills we have accumulated in forty years of working with the Serbian workforce and Serbian wood, in order to make a 100% Made in Serbia product. I can see our Italian collaborators here today, happy to meet with their Serbian counterparts. As you can see, this is not delocalization, but rather an example of how Serbia and Italy can work together to be both competitive in an increasingly competitive international scenario. As you know, I am a proud Venetian and three flags are raised on our facilities – the Italian, the Serbian and that of San Marco. I would like to combine the Venetian tradition of merchants and explorers with that spirit of Marco Polo, which still today drives many Venetian entrepreneurs around the continents to bring our inventiveness and our hard work. The spirit of Marco Polo was the spirit of the merchant who respected the cultures and peoples he met. It is a spirit of giving a lot, but also taking a lot. We are here to perpetuate that spirit, to exalt the qualities of the products made by men and women of Serbia but also to bring our best quality to this country.”

In the beginning, the Labor Srb production facility spanned 24,000 square meters. This facility is used for cutting oak logs coming from the local forests with FSC certification, which until now, have been delivered in the form of beams for the production of commercialized parquet dowels, under the Itlas and Labor Legno brands. With this new investment, Labor Srb will be able to produce the finished product, combining Italian design and the excellence of Serbian wood to offer prestigious parquet floor all over the world.

Today, the factory spans 56,000 square meters and has 43 workers. In comparison, back in 2015, it had only four employees. The company’s aim is to hire another twenty people by the year-end.