A joint state visit by two ministers is a rare event in the annals of diplomacy. As Deputy Prime Minister and Foreign Affairs Minister Antonio Tajani and Defence Minister Guido Crosetto emphasised several times at the press conference held this morning in the Italian Embassy, this unusual event is intended to mark a change of step forward in Italy’s relationship and capacity for an initiative towards the Western Balkan countries and a clear geopolitical choice from which a new Italian protagonism in the area will start. 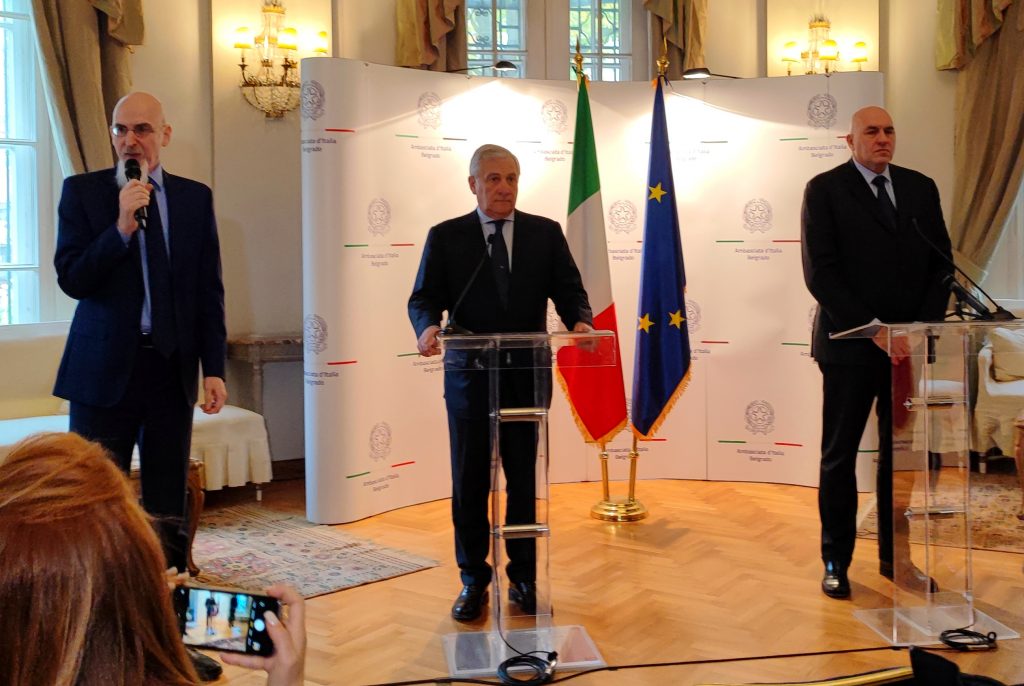 Tajani has repeatedly highlighted that Italy’s approach does not want to overlap with that of the EU in the search for solutions to the constant tensions between Serbia and Kosovo, but intends to open a new chapter of Rome’s intervention in the region, multiplying opportunities for meetings, exchanges, and mutual understanding at all levels between all countries in the area, not just Serbia and Kosovo.

“Italy’s commitment to the stability of the Balkans is not accidental and is not extemporaneous. We will organise a business forum with Serbia to boost the Italian presence and trade relations between the two countries. There are many avenues for cooperation – from new technologies to energy, from defence to the country’s EU accession, and from cooperation in controlling the flow of migrants along the Balkan route to cultural and social exchanges.

Defence Minister Crosetto said he was positively impressed by the willingness shown by Serbian President Aleksandar Vucic in the search for a solution to the license plate crisis in northern Kosovo:

“Vucic’s attitude went beyond my best expectations and I was impressed. It is no coincidence that EU High Representative Josep Borrell himself had words of appreciation yesterday for the openness shown by Vucic. Our visit today underscores the new government’s desire to be strongly present in the Balkans, while making an active contribution to stabilising this area of Europe as well as North Africa and the Mediterranean in general. Let us not forget that since 1999, the actions of the Carabinieri in Kosovo have been constantly appreciated by both Serbs and Kosovars, and we want to disseminate and strengthen this model of dialogue and respect for commitments.”

Crosetto also added that he sees no similarities between the crisis in Kosovo and the situation in Donbas that led to the war between Russia and Ukraine: “These are different situations that require different approaches, Serbia follows its agenda and tries to do so autonomously, even from Moscow”.

After the meeting with the President of the Republic of Serbia, Aleksandar Vucic, the Italian ministers’ schedule includes meetings with their Serbian counterparts, Serbian Foreign Affairs Minister Ivica Dacic and Defense Minister Milos Vucevic, as well as with Prime Minister Ana Brnabic, before leaving for Pristina.

“We will reiterate to the Kosovo leadership that unilateral actions are not needed and are not acceptable to Italy. It is not up to our country to present proposals for an agreement between the parties, but Italy is now here and we will emphasise the great commitment of our country,” recalled Foreign Affairs Minister Antonio Tajani.