Artist Robertson Käppeli has recently become a “Serbian brother-in-law” by marrying Milica Bregovic, the niece of the famous musician Goran Bregovic. Following the wedding, Robertson decided to move to Belgrade where he recently opened his exhibition ‘Vernissage’ at the Jevrem Grujic House.

Although his brother is a banker and his sister a diplomat, Robertson decided to become an artist and thus continue a long artistic tradition of his family. He is the third generation of the very successful family of painters from Davos.

When we met up with him for an interview he said: “We can try talking in Serbian. I don’t know it that well, but if we talk slowly, there won’t be any problems”. He has been learning Serbian for the past six months by himself and with the help of his friends while he uses mainly English to converse with his wife Milica. Although he has been travelling extensively between Serbia and Switzerland in the last few months, Robertson says that he is definitely a Belgradian. He has also been given a Momo Kapor’s book “Guide through Serbian Mentality’ which he is thrilled about. Although he heard stories of many young people leaving Serbia to live abroad in search for the better future, he decided that he would follow his heart.

“I did not ponder a lot about where Milica and I would live. I like Belgrade very much. I like its energy and people. Everything is somehow different than in Switzerland. I have met many artists here, I can work freely, and nothing will stop me from exhibiting abroad too, which I am planning to do”, says the young artist. “I have noticed that artists here are better organized and that they cooperate among each other which is not the case in Switzerland. I especially like the Ciglana art quarter and the Dev9t Festival which takes place there”, Robertson adds.

Lazar Secerovic from the Jevrem Grujic House has nothing but nice things to say about Robertson. His exhibition in this venue is his first ever in Serbia.

“Robertson is a wonderful young man who wants to live and create in Serbia. Although he is a young artist, he has already had a lot of people in Switzerland buying his work and now he is continuing his career here. I keep telling him that the living standard here is much lower than the one in Switzerland, and that, for instance, the average salary of a supermarket employee is only 20,000 Dinars, but he is so in love that he just doesn’t hear me”, Secerovic says.

Our interview continues with a shot of rakija, his favourite alcoholic beverage, and we are talking about his first encounter with Belgrade and Milica.

Their love was purely accidental. He came to Belgrade with his artist friend who is a Serbian native but had been living in Switzerland. He wanted his stay to be short one during which he was supposed to meet up with a few Serbian painters, but, as destiny would have it, he met Milica at a club. They fell in love pretty quickly after their first meeting and married in summer, in the town of Perast, where Predrag and Goran Bregovic have a house. The famous musician could not attend the wedding, but he did organize a lunch party for the newlyweds the day after.

Apart from this, ‘official’ wedding, the young couple also had an ‘artistic’ wedding at the Belgrade art quarter Ciglana. The best man was sculptor Viktor Kis and there were quite a few of their artist friends in attendance. Robertson says that he met Viktor soon after arriving to Belgrade and was taken by his spontaneity and friendliness. Today, they collaborate and work together and the exhibition at the Jevrem Grujic House is just one of the results of this cooperation.

In one room, visitors can see a sculpture of a woman, cast in bronze, lying down with the patina in her hair, placed on the stainless steel straps. This is Viktor Kis’ work. Another installation comprises of twenty concrete books surrounded by broken metal belts.

“Both installations share the same story. The red-haired girl is the central character here and Milica was my inspiration for the piece which I named “Delirium”. The girl is just about to wake up and she is in between the waking and dream state so the story basically goes in two directions – past and future”, Käppeli explains while proudly showing his sculpture. As far as the second installation goes, he plans to add more or take away concrete books as he sees fit.

“The books represent an infinite library. There is candle wax on them which symbolizes the fact that things disappear, pass by, burn, or fall into oblivion just as books might disappear one day as technology develops. On the other hand, some things will remain eternal despite everything”, the young artist adds. 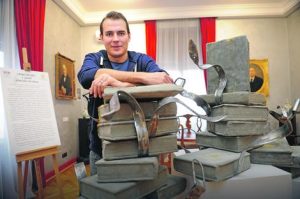 He adds that he has never worked with those kinds of materials because he usually did marble sculptures and large format watercolour paintings in the past. Robertson’s parents and two gallery owners have come from Switzerland to Belgrade especially for the exhibition.

Since 2013, Serbian Monitor has been offering to its readers carefully selected news about the Republic of Serbia, as a daily commitment stemming from the genuine desire to offer undistorted information about a country that is too often a victim of prejudice and superficiality. From November 2016, this service is available in English and Italian with a growing number of original articles with a goal of providing a complete picture of this Balkan country's economy, politics, culture and society.Our archive is completely free of charge, available to anyone who wants to get to know the country, to study its specific aspects, or to be constantly updated about it.This project will only be able to continue with the help of readers on whom we are calling to provide a small financial support so that we can continue supplying an increasingly expanding pool of information and original contributions.If you appreciate our work, please click on the button below.