The Steering Committee of the Serbian Bar Association (AKS) considers that the state of emergency was introduced in the Republic of Serbia in an unconstitutional manner.

“The decision of the President of the Republic, the Speaker of the National Assembly and the Prime Minister to declare a state of emergency does not contain a rationale behind such decision, which makes it impossible to determine whether the conditions for the application of Article 200(5) of the Constitution of the Republic of Serbia have been met, i.e. whether there was a reason why the National Assembly was unable to meet,” the Association’s letter states.

“In Article 200, paragraph 1, the Serbian Constitution states that a state of emergency is declared by the national assembly and this right of the National Assembly, as a legislative body, cannot be suspended by any decision of an executive body,” the Bar Association recalls.

The Steering Committee of the Bar Association of Serbia does not contest the need to restrict the rights of individual citizens in order to effectively prevent the spread of the epidemic and protect the health and life of citizens, but at the same time, insists on the continued adherence to the Constitution by the executive authorities in deciding which, to what extent and how much the rights of each individual may be restricted.

In the state of emergency, the Serbian Bar Association has been closely monitoring the adoption and implementation of all measures taken by the competent state bodies and, in accordance with its role in society, will react whenever it considers that there has been a violation of the legal order to the extent that this represents a danger to the rule of law. 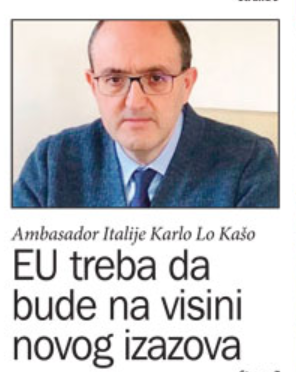 Ambassador Lo Cascio: “Europe must rise to the new challenges”