In life, as in politics, there comes a time to understand and accept that a cycle is over. This may be a work experience, a relationship, or even the political path one has taken and interpreted. 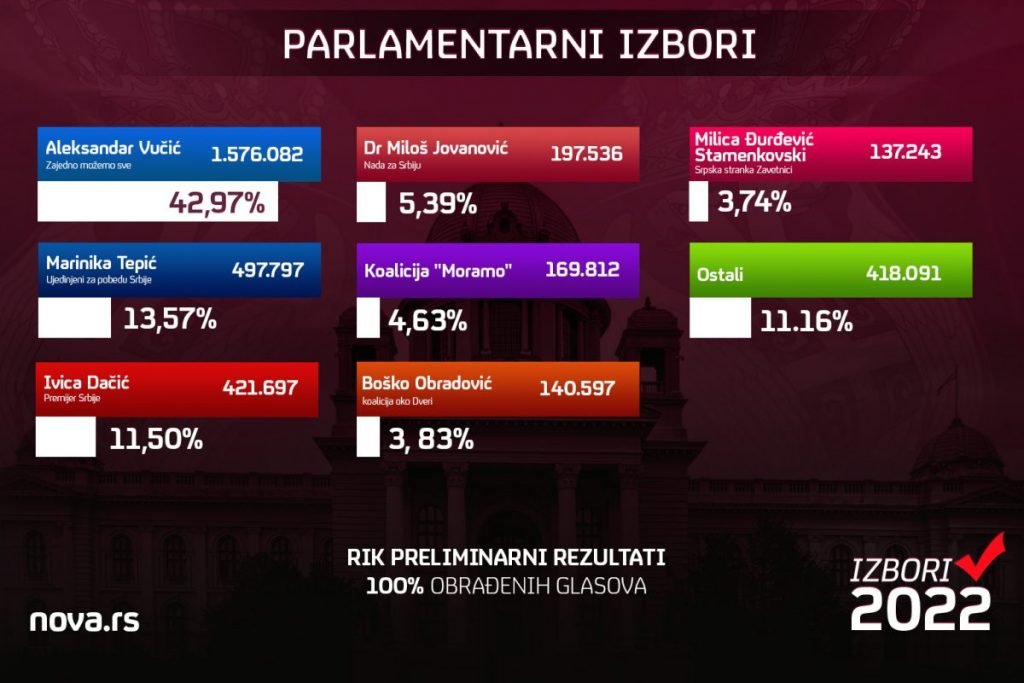 This is what Boris Tadic, two times Serbian president, from 2004 to 2012, has failed to do. In the elections held on Sunday, 3 April, he won a melancholic 1.67% of the votes. It may seem strange to the most superficial voters that we are starting this article writing about Tadic, because the grizzled ex-president represented the maximum expansion of pro-European sentiment in the country during his years in power. In 2008, the prospect of achieving the Western living standard within a span of one generation rewarded the Democratic Party, led by Tadic, under the slogan “For a European Serbia”, with 38% of the vote, which, added to the votes given to Cedomir Jovanovic’s Liberal Democrats and other minor parties, defined a pro-European consensus of at least 45% of voters. However, in the last fifteen years, in less than one generational span, the explicit electoral consensus for the pro-European option has shrunk to less than half, perhaps barely a third of the votes.

This is what official Brussels, Berlin, Paris and Rome should understand – that tactics, uncertainties and inadequate negotiations before and the war in Ukraine today have caused so many nationalist right-wingers to flourish in Serbia and an unprecedented feeling of affinity with Russia.

Partly thanks to the natural tendency of the electorate not to promote change when insecurity factors increase, Aleksandar Vucic was able to achieve a success that thirty days ago seemed hopeless in the dimensions it assumed, and that is winning a triple bet – on his political longevity, on economic growth not bound to the Europeanist perspective, and on multipolar diplomatic action, the latter of which will be under very strong pressure as early as this week.

Even if his party is in decline compared to the last comparable elections, those from 2016 (from 48.3% to 42.9%), Vucic must consider himself extremely satisfied with having withstood the right-wing wave, a fact that he will weigh up in his talks with the Americans and Europeans: “Behind me mounts a chauvinist, traditionalist, sovereignist, homophobic, Russophile right-wing, which only I can keep at bay,” he will more or less say, in a parliamentary game that is reopening after the previous uninformed parliament convocation (249 deputies out of 250 came from pro-government parties). 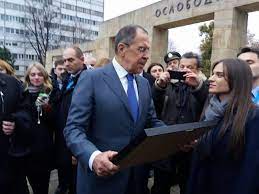 Milica Djurdjevic Stamenkovski gave Serghej Lavrov a photo of the Russian troops who collaborated in the liberation of Belgrade in 1945.

Serbian right-wingers will now be spread everywhere in the parliament chambers. The right-wing is avowedly sovereignist, anti-European and Putinist, and is represented by the strong-willed Milica Djurdevic Stamenovski, who started from the ranks of the Serbian Radical Party and has built up the visibility of her Srpska Stranka Zavetnika (which won 3.74% of the vote) on pro-government television channels. It is important to explain what the term ‘zavetnik’ means in Serbian culture. Zavetnici (the plural of ‘zavetnik’) were the patrons of the archaic Serbian family and its estate, similar to the Latin lari and penates, to whose protection soldiers relied on when they went off to war. The traditionalist connotations of the term and the feelings it arouses in the Serbian soul are therefore clear. Djurdjevic Stamenovski, the daughter of a war reporter and friend of Vojislav Seselj, was invited to the Duma and managed to have her photo taken with Russian Foreign Minister Sergey Lavrov. It was thus easy to cash in on part of the electoral dividend of the pro-Russian wave that has swept through the country since 24 February.

A right-wing promoting God, fatherland and family, the Dveri movement (3.83% of the vote) has perhaps been penalised by extreme and verbal violence that has always been the trademark of its leader Bosko Obradovic. This is a technique which Vojislav Seselj had perfected, but which no longer works today – the country has become radicalised again, but without verbal intemperance. Dveri is an archaic Slavic term that indicates not the generic “door” (the literal translation of the word), but the portals of churches and monasteries, i.e. the metaphorical portals of knowledge and religious experience. This is why the political programme is, we might say, Salazar-like, clerical-fascism based on the support and expansion of the traditional family, on a return to archaic and rural values destroyed by modernisation and globalisation, on forms of economic autarky and on empowering Serbian entrepreneurs instead of foreign ones. 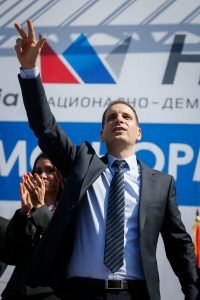 Milos Jovanovic, pictured here giving the nationalist ‘three-finger salute’, has already pledged his support to Aleksandar Vucic, both at the national level and in Belgrade.

The greater than expected success of Milos Jovanovic (5.39% of the vote), the president of the Democratic Party of Serbia (DSS), a graduate and doctorate holder from the Sorbonne, should be credited to those voters who sought a Eurosceptic, anti-NATO, traditionalist political proposal on the right, but without the exaggerated tones or references to an archaic golden age that characterises Zavetnici and Dveri. As with the latter, Jovanovic believes that Kosovo is an integral part of Serbia and must be protected from what is seen as an abusive land grab orchestrated by the US and other European powers. For at least a decade, Jovanovic has been in the circle of the closest collaborators of Serbia’s former conservative president Vojislav Kostunica, as has been the mayoral candidate in Belgrade from the Ujedinjeni za Pobedu Srbije coalition (13.57%), the classicist and diplomat Vladeta Jankovic, for even longer. The 81-year-old Jankovic did not find himself by chance in the coalition promoted and financed by the tycoon Dragan Djilas. When the latter was secretary of the Democratic Party after having defenestrated Boris Tadic, Djilas had his political programme written by Goran Vesic, outgoing deputy mayor of Belgrade and his future great political enemy but then still in the democratic ranks, who invited him to adopt a moderately centre-left policy even though, as Vesic admitted, “we know that you are profoundly right-wing“.

The coalition led by Marinika Tepic is also a substantially right-wing party, albeit pro-European, moralising and technocratic, which also includes the People’s Party (Narodna Stranka), founded by the former Democratic Party official and Serbian foreign minister Vuk Jeremic, who was also the former secretary-general of the UN assembly, known for playing the nationalist marching song “Mars na Drinu” on UN-hosted New Year’s Eve celebration in 2013, which caused quite a stir.

However, there is an important difference: Tepic’s coalition is a political party clearly opposed to Aleksandar Vucic, while Dveri, Zavetnici and Jovanovic are considered to be fifth columns of Vucic himself in the varied and wide electoral basin of the Serbian Right. 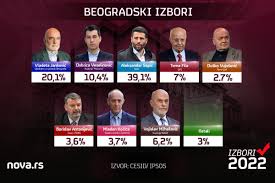 In Belgrade, future mayor Aleksandar Sapic will team up with the Socialists and Jovanovic.

Nor can Ivica Dacic’s Socialist Party of Serbia (11.5% of the vote) be considered left-wing, representing the centres of state and economic power that survived the fall of Milosevic’s Yugoslavia, which is still capable of regenerating itself by cloaking itself in a dose of populism in order to velvet up a nostalgic and socially marginal electorate. The presence of trade unions in the socialist lists should not be misleading. In Serbia, the state trade unions mostly organise leisure trips for their members and shopping sessions in public buildings at which they sell sausages, cheese and clothes that the members can pay for in instalments. Of course, selling ham in six instalments to be consumed at family celebrations and trips with overnight stays in State-owned battered spas are also consensus management, but this is a far cry from any idea of social struggle for better living conditions.

Vucic’s SNS and all parties fully credited as being the right, thus excluding the Ujedinjeni za Pobedu Srbije coalition and Socialists, have thus exceeded 60% of the vote in this election round.

Vucic’s strategy of building parachutes to the right in case he failed to win in the first round, has created the conditions for boosting those parties which, apart from Milos Jovanovic, who already ready to join forces with Vucic, could gain further consensus by playing the role of parliamentary opposition from the right. Even if Vucic succeeds in establishing himself as the man of moderation and stability in this scenario, there is a risk that certain chauvinist, sovereignist and tout court xenophobic discourses will find more and more space in the Serbian parliament and public debate. 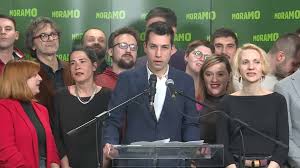 Certainly, the only left-wing and ecological party that enters Parliament will not be able to counter this – the Moramo coalition (4.63% of the votes in parliamentary election, but 10.5% in Belgrade), whose assertive name has perhaps lost than gained votes in a libertarian if not an explicitly anomic country. The 12 elected members in parliament and 14 members of the Belgrade assembly will not be able to counter the voices of the right, but at least a certain democratic and radical cultural area now has political representation that is not caged in the logic of larger parties and catch-all parties like the defunct Democratic Party.

In this scenario, the attempts of the European Union and NATO to discipline Serbia and its foreign policy of regional pre-eminence and multi-polar diplomacy could have tragic results. There are strong interests in creating a new confrontation on the direct borders of the European Union, a front perhaps not of explicitly military conflict, but of continuous tension to feed constant frictions of mutual destabilisation between the blocs that are already confronting each other in Ukraine. Serbia, as it often happens, finds itself traversed by these geopolitical fault lines and even ambitiously trying to ride them.

The message that the Serbian electorate has clearly sent is one of distancing itself from the European perspective. If accession negotiations continue, they will be pursued with even less enthusiasm and commitment than before. But this will mean setting out into the wide-open sea of a new multipolar order in which small vessels risk being swept away by the waves unleashed by large global aircraft carriers.

Did you find this article interesting? Please support our website by clicking here .