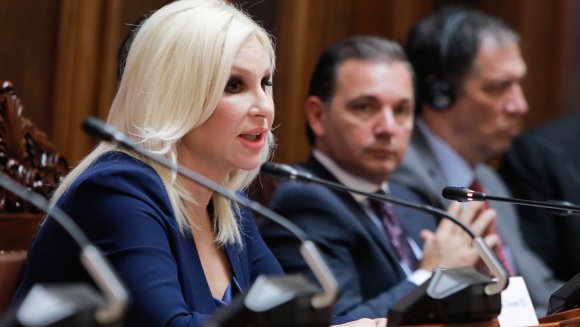 The conference Serbian-American Relations: Energy Diversification Strategy was held yesterday, 12th of May, at the National Assembly of Serbia.

The conference Serbian-American Relations: Energy Diversification Strategy, whose the main topic was alternative ways of supplying energy to Serbia, was held yesterday in the National Assembly of the Republic of Serbia. The Conference was organized by the Assembly of Serbia, the U.S. and Israel embassies in Belgrade.

Energy stability is equal to political stability, highlighted Deputy Prime Minister of Serbia and Minister of Mining and Energy Zorana Mihajlović, reminding that 90% of gas Serbia imports from Russian Federation. Considering the new geopolitical context caused by the war in Ukraine, all plans related to the reduction of carbon and transition to renewable energy sources must be implemented faster, even in the next six months, underlined Mihajlović.

The first step to achieve this is finishing the construction of the gas interconnector Nis (Serbia) – Dimitrovgrad (Bulgaria) by the next year, said Mihajlović. In her words, this is only the starting point that should lead to the construction of interconnectors in the other countries such as Croatia, North Macedonia and Romania, which will enable the creation of a network among neighborhood countries and facilitate gas supply.

Talking about renewable energy sources, Mihajlović emphasized that the main goal of the Energy development strategy until 2050 (Strategija razvoja energetike do 2050. godine) is getting out of low-calorie coal into new cleaner energy sources, thanking Israel and the U.S. for great advisory support.

The Speaker of the National Assembly of the Republic of Serbia Ivica Dačić agreed with Mihajlović that Serbia`s main goal is to increase the number of sources of energy supply, which is feasible in the long term. This could be achieved through the supply of liquefied natural gas from Greece for example; yet, from Dačić`s point of view, reorientation of gas sources is slightly possible to happen in the short term. He reminded that from the beginning of the war in Ukraine Serbia did not have a single day of gas shortage or stagnation, which is the best proof of Serbia`s stability in supply.

The question of energy efficiency is not in the scope of domestic policies, but rather the key factor of international politics, said Dačić. When it comes to the legal framework, Dačić stressed that Serbia has started to build a very systematic approach to developing an adequate legal background, such as the Climate Change Law (Zakon o klimatskim promenama) adopted last year and the Energy development strategy.

Strong support from the U.S. and Israel towards Serbia`s energy diversification

Talking about the relationship between Serbia and the U.S. when it comes to energy supply, the U.S. Ambassador to Serbia Christopher Hill said that the U.S. strongly supports Serbia in the process of energetic diversification, while Mihajlović and Hill have agreed that stability of energy supply is strongly intertwined with sovereignty and independence.

Turning to the high dependence on Russian gas, the U.S. Ambassador underlined that energy should not be used as the weapon of political pressure. Moreover, by his words, Serbia is already paying the too high a gas prices to Russia and States are willing to help by supporting new energy resources, such as Turkish stream 2 and Bulgarian stream, as well as through investments in new technology which will speed up the transition to renewable energy.

Hill added that the U.S. advisory program is also oriented toward helping Serbia in creating an adequate legal frame in order to achieve sustainable economic growth, such as implementation of solar panels and long-distance heating programme in the households.

Although this shift cannot happen over the night, it`s very needed, considering also the fact that Serbian citizens use from three to four times more energy in comparison to European Union average, concluded Hill. The Deputy Assistant Secretary in the Bureau of Energy Resources of American Congress Laura Lochman additionally emphasized the urgency of energy independence of Serbia from Russia.

The founder of the Serbian-American Friendship Congress (SAFC) Vladimir Marinković highlighted that the U.S. is very supportive towards Serbia in all fields of society. As the best proof of this support, Marinković pointed investments in Serbia made by the U.S. which are worth more than a billion of dollars as well as the fact that more than 25.000 Serbian citizens are employed in the U.S. companies in Serbia, especially in the IT sector.

Additionally, Marinković said that very important visits were realized by the American senators and congressmen from the Budget Committee in the last two months, which can strongly influence the politics of the White House towards Serbia.

Talking about support from Israel, as Mihajlović mentioned, this country is one of the best examples when it comes to a successful transition to renewable energy sources. The shift to sustainable energy in Israel was mainly caused by climate change, but also by geopolitical reasons since Israel was highly dependent on gas from Egypt, said the Ambassador of Israel in Serbia Yahel Vilan. Israel’s main goals for the future are achieving 95% of use of natural gas only, eliminating coal-fired power plants and reduction of energy consumption up to 17% by 2030, underlined Vilan.

Israel and Serbia have been cooperating strongly in the field of energy in the last few years, said the Israel Ambassador to Serbia and thanked Mihajlović for supporting this cooperation. He also added that an agreement between the two countries on renewable energy sources was recently signed.