In the aftermath of presidential elections, there have been many speculations about the foreign policy choices that Aleksandar Vucic is going to make.

Serbia is a parliamentary republic, but appointing a politician who is, by far, the strongest in the country to the role of President of the Republic, after a clean electoral success like the one on Sunday, will change constitutional arrangements and the materiality of all policy choices which will now go through the president’s cabinet first, and the prime minister’s second.

Nikolic’s presidency was characterized by a strong focus on the Russian Federation and the People’s Republic of China. Certain Western countries are now wondering if Vucic further solidifying his power will also lead to an increase in Serbia’s sensitivity towards the East, impairing Serbia’s accession to the EU. During his electoral campaign, Vucic accused European partners of being at the source of the delay of the European integration process for Serbia, and the reason for the declining interest in the country becoming the thirtieth EU member. However, this rhetoric seemed to be a good excuse to shift the focus from Serbia’s lack of commitment to the alleged blame on the EU’s counterparts.

We are talking about these scenarios with attorney Jovan Palalic, secretary general and vice president of the Srpska Narodna Partija (Serbian People’s Party), a conservative party headed by Nenad Popovic, the vice president of the Democratic Party of Serbia (DSS), which boasts close collaboration with Vladimir Putin’s United Russia Party and top Chinese officials.

“Serbia’s foreign policy continues to be based on the EU accession process and fostering good relations with Russia and China. My position is that the EU accession is not a good thing for the country because at present and even more so after the summit in Rome, we do not know what will become of the Union. I am certainly in favour of good relations with the EU, but I am against accession. Personally, I am for strengthening economic relations with the Russian Federation, because the potential of the Russian market has not yet been fully tapped into”, Palalic says and adds: “In addition to maintaining good relations with the neighbouring countries and the EU, Serbia, as a central Balkan state, is also trying to strengthen its future political and economic cooperation with Russia and China. It is a well-known fact that we have excellent political relations with these two countries, founded on many years cooperation in regard to the biggest international political issues”.

What is this cooperation based on? 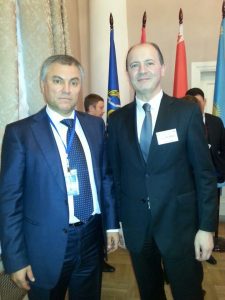 Jovan Palalic with the Speaker of the Russian Duma, Vyacheslav Volodin

“First and foremost, there is respect for international law and particularly the territorial integrity of countries. As a sovereign state, we are especially grateful to these powerful countries for their positions regarding Serbia in the UN Security Council. During the visit of the Serbian parliamentary delegation to China in the autumn last year, as a member of the delegation, I had the opportunity to hear senior Chinese officials’ stance on international politics, and them reiterating that they appreciated Serbia’s position on China’s territorial integrity which is based on the policy of one country, two systems. Furthermore, our policy of military neutrality and the intent to boost the overall security in Europe,  despite not being a member of the NATO block and the EU, has also deepened our relations with Russia. Having a military cooperation agreement with Russia, as well as the one with Western partners, without actually being a part of any military bloc, is one way to increase our security. I have already spoken about this at the Foreign Affairs Committee Session of the Collective Security Treaty in St. Petersburg in November 2016. All of the aforementioned circumstances have an impact on the development of economic cooperation between our country, on one side, and China and Russia, on the other.”

How important is Serbia for China from an economic point of view? 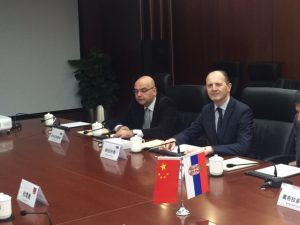 “Under the auspices of the project One Belt, One Road (The New Silk Road), China  is very interested in continuing to invest in Serbia. In regard to Russia, we have a favourable but unimplemented Free Trade Agreement. The European countries should take better advantage of this opportunity with a view of accessing these two markets through Serbia under better conditions. Belgrade is a major hub in the Balkans and these two powerful countries are aware of the fact that Belgrade is the economic input centre in Europe. This could also facilitate appearance of European companies in these two markets. We want to be the place where East and West successfully meet, and we succeed in that. I am a great optimist regarding the further cooperation with Russia and China.”

In addition to relations with Russia and China, Serbia has been developing increasingly intense and fruitful relations with various Islamic countries.

“We would like to have good relations with Islamic countries as their investments are increasing in Serbia. There are investments made by the UAE and Qatari companies in construction and agriculture, as well as investments by Azerbaijan, especially in the field of infrastructure. We have a free trade agreement with Turkey which is an opportunity for further development of our economic cooperation. We are going to develop good relations with Iran by working together on concrete economic projects. For years, Serbia has maintained good relations with the so-called Islamic world and its countries. Today, this is accomplished through an increasingly complex economic cooperation. We also believe that we can find common interest with all Eastern countries. Investments and collaboration on good policies with everyone, while taking into account the interests of both parties, are yielding positive results.”

What role does Italy play in all of this considering that the country is the number one trade partner to Serbia and that is currently searching for new models of cooperation with Serbia? 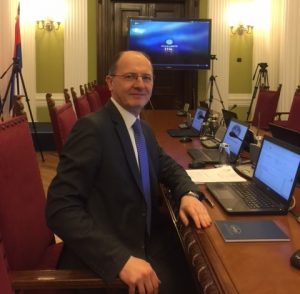 Jovan Palalic was born in Backa Palanka on 26th April, 26, 1971. He graduated law from the University of Novi Sad’s Faculty of Law. He works as a lawyer in Novi Sad. Apart from being the Secretary General of the Serbian People’s Party, he was elected four times to the position of a member of the Parliament of the Republic of Serbia where he currently chairs Justice and Administration Committee and the Local Governments Committee. He has participated in various conferences on the topics of justice, defence and security. He has a regular engagement as a political commentator for the Russian Parlamentskaya Gazeta, and is a member of the Institute of Collective Security Treaty Organization in Moscow.

Cultural heritage as economic asset: Bridge between Italy and Serbia

Gordy: In five years, I see Serbia as a small country dependent on foreign investors