The pandemic is testing the ability of governments in giving efficient responses to the economic crisis. Countries that have made huge expenditures might recover faster but also will have to face important financial debts.

A study carried out by the European Chamber, together with the help and contribution of the governments of different European countries, including Serbia, compares the financial expenditures of 46 governments in search of the longed-for economic recovery from the crisis caused by COVID-19.

The differences in spending between 46 countries in the same continent, give a glimpse of the big disparities in the responses given.

The significant variability shown by these numbers raises questions. Since it must be borne in mind that a large part of these figures corresponds to loans that will have to be repaid, did the countries that have spent the most do the right thing?

Patricia Lojo, a researcher for this comparative analysis, states:  “The government of Serbia has made a higher expenditure compared to its neighbours North Macedonia and Bulgaria, but much lower than other countries such as Italy and Germany”.

OECD claims that Serbia is one of the least affected countries by the COVID-19 crisis and one of the states with more people vaccinated. Michele Orzan, the President of the European Chamber with extensive knowledge about Eastern and Central Europe, notes: “Serbia has suffered just a moderate contraction of its GDP in 2020, and it expects a growth of around 5% this year, higher than its neighbours listed above. This may be partially attributed to the emergency measures implemented by the government in order to mitigate the negative economic effects of the COVID-19 crisis.

However, “It is not who spends the most, but who spends the smartest”, says Orzan, adding the following reflection: “The additional debts that the countries with excessive spending will have to cope with, may in the long term lead towards an even more negative situation than the one they are currently experiencing”.

Following the Serbian government’s approval of financial aid programmes to assist SMEs as a part of its long-term economic plan, the higher growth forecasted may show that appropriate choices were made.

In order to have a fair comparison between different economies, the absolute amounts have also been recalculated in euro and in relation to their respective 2019 GDP (Gross Domestic Product).

Financial spending and government efforts differ heavily between countries, and this will be one of the factors influencing recovery and how the well-being of their economies will look in the future. 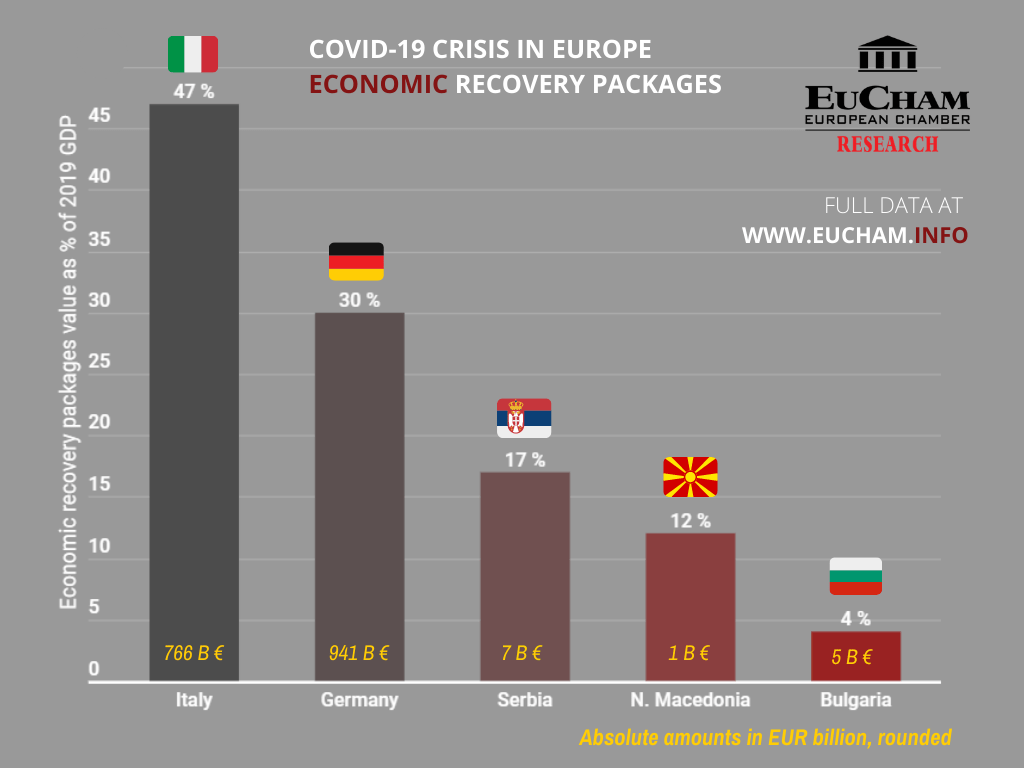 In order to better understand these numbers, the amounts can be compared from different angles, for example in expenditure per capita:

The governments of these countries will have to demonstrate why there are such large differences between countries, especially when the money does or does not bring the desired benefits.

The full survey of 46 European countries at eucham.info