Shortly after the announcement by the President of the Republic Aleksandar Vucic that he would impose a curfew in Belgrade from Friday at 5 p.m. to Monday at 5 a.m., more and more people began to gather in front of the parliament building, in Nikola Pasic Square in Belgrade, until about 5,000 protesters arrived.

At the origin of the protest was the government’s uncoordinated actions which, before and after the elections on 16 June, relaxed the measures to control the spread of the coronavirus and then again introduced the curfew following the numbers of infected people soaring in recent weeks.

The clashes with the police began around 9 p.m. and at 10.15 p.m., a group of demonstrators managed to break through the main door of the National Parliament.

The former Foreign Minister and former UN Secretary General, Vuk Jeremic, now the head of the People’s Party in opposition, arrived with some of his staff in front of the Parliament and was attacked and chased away by demonstrators. The former member of parliament of Dveri, Srdjan Nogo was also told by demonstrators to leave.

The violent police reaction expelled the demonstrators from Parliament and the massive use of tear gas cleared the square at around 11.30 p.m. The demonstrators then made their way to the State television station (Radio and Television of Serbia) in Takovska Street where the clashes continued until 2 a.m. 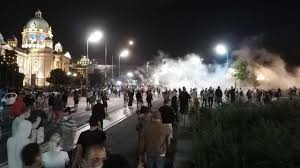 Click on the link to can watch the video chronicle of the night of protests: https://youtu.be/qM6W2Tmlcsg

Dozens of people were arrested and injured: the protesters threw stones at the law enforcement agencies and used road signs as rams against the policemen on horseback, some of whom were thrown down and beaten. Various police vehicles and rubbish containers were also set on fire.

Only the arrival of the special forces around one o’clock in the morning brought the situation under control after at least another hour of very violent clashes.

Political analyst Djordje Vukadinovic said that the police reaction was among the most brutal ever seen in recent years. “There is no doubt that there have been acts of violence on the part of the protesters, but such a violent reaction had not been seen for decades, probably to compensate for the initial unpreparedness that allowed the protesters to set fire to and damage many police vehicles. There was a large number of policemen in plainclothes who attacked the protesters and then arrested them”. The Human Rights Centre in Belgrade condemned the actions of the police.

Police Chief Vladimir Rebic was interviewed live in the RTS studios while the clashes were still going on a few meters away from the state television building:

“We will not allow vandalism on the streets and against public buildings. Around ten o’clock in the evening, there was an assault on the Parliament and it is clear that the number of law enforcement officers present was not sufficient to control the situation. When the reinforcements arrived, the Parliament was freed and among those arrested we also registered the name of Danijel Knezevic, who, together with the former Member Srdjan Nogo, is one of the organisers of the assault on Parliament.  Of the approximately 5,000 participants in the protest, only two hundred promoted violence. I would like to appeal to all citizens to reduce the tension in these particular incidents due to the coronavirus and to demonstrate humanity. We will not allow the spread of anarchy on our part.“ Rebic has also confirmed that there have also been protests in Novi Sad and Kragujevac.