A local election was held in Belgrade today. A total of 1.185 polling stations were opened, and the voting took place between 7.00am and 20.00pm. Local elections were held also in Bor, Arandjelovac and Sevojno. 1,606,693 people had the right to vote, and according to the CESID, the turnout was 51%. 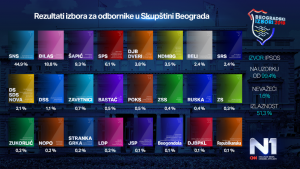 Other candidate lists have not reached the legally required census.

The Centre for Free Election and Democracy (CESID) has published the following results based on the voting results from 70 polling stations. The Serbian Progressive Party (SNS) won 45.6 % of the vote, Dragan Djilas 18.8 %, Aleksandar Sapić 8.1 % and the SPS candidate list 6 %.

That would mean that the Serbian Progressive Party would be given 63 seats in the Belgrade Parliament, Dragan Djilas 26 seats, Aleksandar Sapic 13 seats and the SPS coalition 8 parliamentary seats.

The Belgrade vote was for local offices only, but it’s considered important because of the city’s key role in Serbia’s economy and politics. Official results are due Monday, but they are not expected to differ much from the preliminary projections.