A massive protest, as varied in purpose as in claims…

Last Saturday, the largest demonstration took place since the one against Kosovo’s independence in Belgrade in February 2008. Unlike then, the flood of people has shown composure and civilized behaviour. Unlike then, there were no incendiary speeches that gave an implicit green light to the violence, looting and assaulting the American and Croatian embassies. Unlike then, there were no politicians in the front row or doing public speeches, while a truck serving as a speech platform was used only for the actor Branislav Trifunovic and the Kosovar activist Rada Trajkovic.

The reason the first ever in the series of the Saturday protests was the an aggressive attack on the leader of the Serbian Left Party, Borko Stefanovic in Krusevac who, disheartenedly, won 0% votes at the last election. Naturally, when there is a widespread discontent, even a limited but serious instance can become a trigger for great demonstrations. The first slogan “Stop the Bloody Shirts” has turned into “1 in 5 million” following the statement made by Aleksandar Vucic that he would not meet any requests from the opposition even if 5 million people turned at the marches.

Appropriately, the supposed opposition leaders have disappeared from the helm of the march after the first two demonstrations. On the other hand, they are party leaders with no follow-up, unpresentable, prone to blackmail, or magnates who are no less arrogant than politicians in power today, or fascists tout court. Most of the participants on Saturday would not have joined if they knew they would find themselves marching together with these people. The first success of the organizers was to be aware of them. 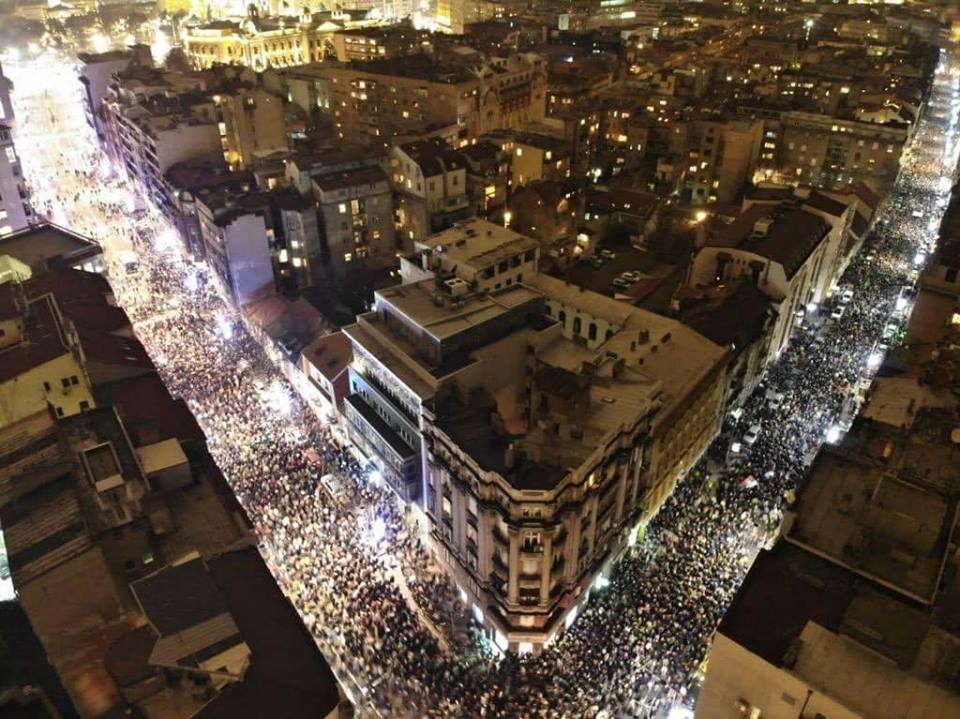 On the other hand, there is the parable of self-dissolution of the movement “Dosta je Bilo” (“Enough is Enough”), which had coagulated the vote of the middle class and young people, especially in Belgrade, to exceed 6% at the 2016 elections and consequently having 16 deputies in the national parliament, of which only two remain today. It is paradigmatic of the organizational, leadership and strategy problems which the opposition usually encounters, due to the internal limitations and the pervasiveness of the SNS-run power system.

Since the assassination of Zoran Djindjic in 2003, Serbian politics has been a rundown of rutilant and unfulfilled promises, brimming with clientelism, familism, and low opportunism in a country where the living standard is much lower parallel to the persuasiveness of politicians.

The strategy of the President of the Vucic Republic is simple – not to legitimize the protest as a political actor, and leave it alone to wander in the political desert of the Serbian opposition.

If Aleksandar Vucic manifests a power that is (apparently) undisputed, so much so that the former president Nikolic, speaking in Krusevac at the celebration of the party’s 10th anniversary, could easily say that SNS staying in power for another 10 years is a “modest ambition”, the current situation is also a result of the collapse of credibility that the Democratic Party suffered in the last years of Tadic’s presidency, with accusations of arbitrariness and cronyism overlapping those that today the demonstrators are launching against the SNS.

On the other hand, the great historical responsibility of the ruling group of the democratic parties lies in the fact that they have failed or were unwilling to promote, in a structured manner, the diffusion of democratic, meritocratic and civic values in society, public administration and Serbian politics in the years when they were in power.

The success of the SNS also stems from the enormous disappointment of a segment of the population that was hoping for truly democratic practices and behaviours, and which, at a certain point, preferred to protest voting for the Milosevic-created characters that re-emerged from the 1990s.

The Democratic Party was the supposedly centre-left party, supported mainly by the wealthy bourgeoisie of Belgrade and other major cities of Serbia. At its summit, the Serbian Progressive Party had a small-minded man like Nikolic, that reflected and redeemed a substantial part of the rural population and the lower strata of society.

But such a radical change in the power status in the country, comparable to the fall of Milosevic, could not have taken place without the support of various European chancelleries and a disappointment in many non-choices, especially regarding Kosovo, in the last years of Tadic’s reign. It is no coincidence that the opposition now accuses Vucic of wanting to sell off the country’s integrity – it’s been over three decades that the country’s leadership has been dealing with Kosovo issue, and whoever from the ranks of the opposition shows an inflexible approach about it has, in parallel, to reassure Atlantic partners that their feet are firmly planted on the ground, if they want to be in power.

What is really decided about in Serbia?

The recent documentary produced by BIRN (Balkan Investigative Reporters Network) on the beginnings of the SNS tells of a ‘vulgate’ that not even its most ingenious militants could accept, namely that the creation of the party was the result Tomislav Nikolic’s frustration in seeing himself always defeated and always number two in the radical party of Vojislav Seselj. The documentary goes on to say that Tadic turning against him was a successful move, and that the party was financed by certain “tycoons”, annoyed by the conflicts with Tadic, such as Miroslav Miskovic, Milan Beko and Stanko Subotic Cane. However, this narrative is too partial to succeed. There is no denying the speed with which the SNS organized itself in every municipality of Serbia and its widespread presence and the international support it has enjoyed.

Even BIRN itself, financed by international organizations, cannot go beyond saying what many hypothesize, that, for example, it is ludicrous to think of Rudolph Giuliani who rushes to Belgrade to support the mayoral candidacy of Aleksandar Vucic in 2010 following a call from a Serbian tycoon, or that the friendship between Vucic and the Emir of Abu Dhabi, Muhammad bin Zayed was “coincidentally” forged in Scotland.

Miki Rakic, the closest associate of Boris Tadic, a friend of Aleksandar Vucic, a fellow citizen of Ivica Dacic, a man whom the Americans and the British totally trust thanks to achieved  successes in the fight against drug trafficking and the capture of Karadzic and Mladic, was a true junction of power in Serbia between 2008 and his untimely death. In 2011, he proposed to Tadic to agree with Vucic’s appointment as the Mayor of Belgrade and to give Djilas the post of prime minister in order to balance out the interests that came from outside the country. Tadic refused and later disappeared from the political scene.

The changes in Serbian politics manifest themselves in the streets of Belgrade but are almost always decided outside the country. The casting for the future political leader of the country has been going on for some time, but so far the results are so disappointing that Aleksandar Vucic is free to flaunt his serenity and nonchalance as much as he wants.

A real risk is that the protest can be hacked by the most violent and nationalistic movements, especially when it comes to a decision on Kosovo. But without credible personalities, important economic resources and international support, this popular mobilization will also be destined only to increase the frustration about the opportunities that the Serbian people lost.

More in 1 in 5 million, analysis, Belgrade

Who makes the best burek in Belgrade?