Giorgio Ambrogio Marchegiani is the  CEO of the DDOR insurance group and the President of the Italian-Serbian Chamber of Commerce (ISCC) since 2015 where he has been at helm of the revival and re-evaluation of the chamber’s role and the value that it offers to its members.

At the traditional gala evening, this year’s Giuseppe Maria Leonardi Award went to Annino De Venezia, Director General of Aunde. The gala was also a good opportunity for Marchegiani to talk about the role that the Italian-Serbian Chamber of Commerce plays in the relations between the two countries.

The Italian-Serbian Chamber of Commerce is celebrating its 15th anniversary in Serbia. During this period, the chamber followed the country’s transition towards a market economy and its full integration into the rule of law. What were the main contributions that the chamber and member companies transferred to Serbia in this period? 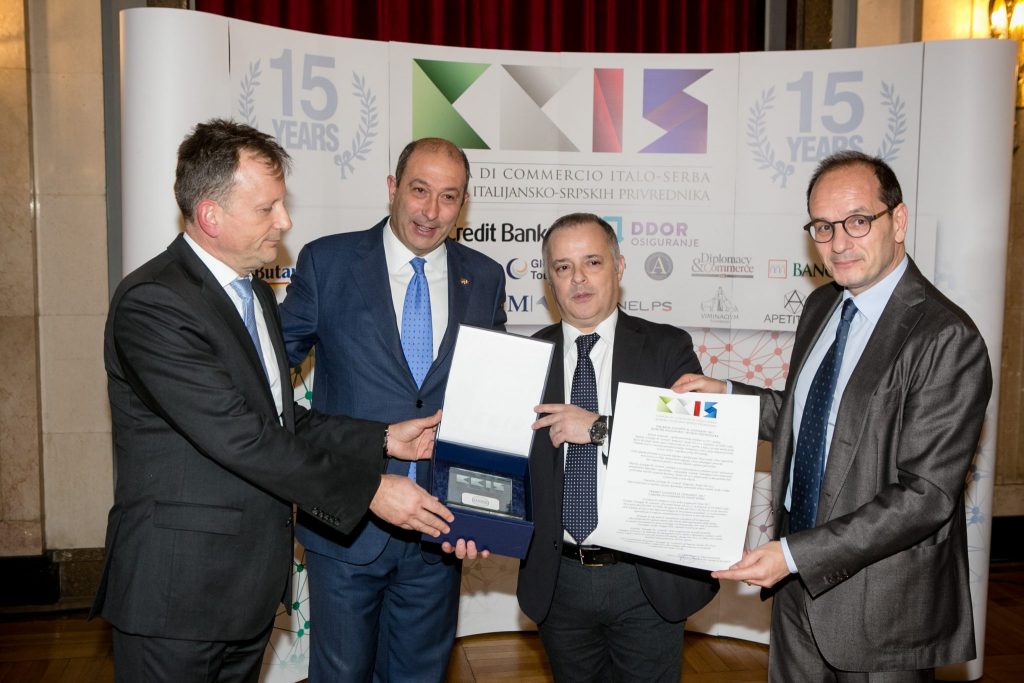 This year the “Giuseppe Maria Leonardi”’s Award went to Aunde, the textile supplier for automotive industry based in Jagodina, that in less han 3 years has reached almost 700 workers.

In recent years, Italian companies in the Chamber have brought technical and managerial know-how to Serbia, as well as capital. I have to say that Serbia is a fertile ground not only from the agricultural point of view which made this transfer a very successful one. It also implied bringing an efficient and structured way of working to the country that did not have it before, both in the manufacturing area and in financial services, where the banks that are no. 1 and no. 3 in the market, and insurance companies that are no. 2 and no 3 come from Italy. The Chamber has been “sounding board” for these experiences, in order to make them usable by other Italian companies and expedite a virtuous development process.

The Italian-Serbian Chamber of Commerce has been on this revival path for less than a year. Could you tell us something about the chamber’s initial results and medium-term objectives?

In the beginning, this revival process is seen in the simplest of things – communication, the daily contact with the members, the internal atmosphere, and the loyalty of its members. In digital language, the Italian term “Camera” is perhaps best translated as “Network”. The medium-term objective of ISCC is to re-affirm its role as an “access point” to a network of companies and people working between Italy and Serbia, as well as to exchange experiences and create value. We must grow, keep developing quality services and create a ‘system’ with other Italian and Serbian institutions.

Today, Italy is one of the main commercial and political partners of Serbia while in recent years, investments have also increased. Additionally, there is the political weight associated with the countries that have risen to prominence like the United Arab Emirates, Turkey, and India which are beginning to develop important relations with the country, while Russia and China play delicate geopolitical games in Serbia. What role can the Italian economic system have on this figurative chessboard?

I am going to reply with two metaphors – firstly, we do not play ‘chess’ but are rather focused on doing business which is a modest goal, but also a more constructive one. Secondly, the economic relations between two neighbouring countries which show a good degree of affinity towards each other are like an ancient tree with deep roots, which grows slowly but inexorably every year. Other countries that, due to their size or excess of capital, must show “stellar” growth in relations with Serbia are perhaps more visible but short-lived trees.

As the CEO of DDOR, one of the largest insurance companies in the country, you evaluate risks on a daily basis. For all those companies that want to come to Serbia, what would you say are risks assumed but mostly negligible, as well as those which often not visible at first glance but can affect the development of an investment project?

The biggest and most overseen risk is that of not understanding the country and its idiosyncrasies and therefore making mistakes in the recruitment of staff and in the approach to project development. This is not a typical insurance risk, but it can be reduced by turning to the existing relationships between investors which is something that the Italian-Serbian Chamber of Commerce plays an important role in.

If we are talking about “insurable” risks, companies often neglect the risks associated with civil liability when they are part of international “supply chains” that operate in EU countries, where “business interruption” can generate high costs. The other element, which is never underlined enough, is the risk associated with natural disasters.

Finally, could you tell us what are the benefits of companies becoming a member of the Italian-Serbian Chamber of Commerce?

It’s an amalgamation of everything I have said previously in this interview. To sum up… You should become our member in order to benefit from the relations between companies and professionals from the two countries, to better understand the Serbian context (or Italian, in the case of the Serbs), to share experiences, to use the network of suppliers and distributors, and finally, to have a group of “peers” with whom to exchange ideas and make plans.

In financial terms, being the Chamber’s member gives you an opportunity  – at a very competitive cost – to reduce the uncertainties of entering and being present in the market that is “almost EU”, and yet it has maintained its peculiarities. In human terms, the Chamber is a nice group of entrepreneurs and managers with whom you can discuss projects and solve problems associated with operating in Serbia and  Italy.