It was the writer Stephen King who said that „books are a uniquely portable magic“. We would like to add to that there are very few people in the world who know how to relay this magic to us, the readers. Books can be a cathartic experience both for writers and readers, but how do writers, especially first-time ones, muster the courage to embark on something that can be so profound, influential and responsible as writing?

In the hyperproduction of books, where quantity far exceeds quality, two childhood friends, written word enthusiasts and perpetual dreamers, Ksenija Ćaćić and Nikola Garovnikov dared to step into the word of „uniquely portable magic“, and write a book that is sure to be a hit because it talks about universal things such as love found, love lost and finding oneself in that turmoil.

Here is their story.

1. Ksenija and Nikola, considering that you have co-authored a book for the first time ever, could you tell us a few things about yourself?

My name is Ksenija Ćaćić, and I am an economist and a graduate of the Faculty of Economics in Subotica. That’s my profession. But my calling is an artist and a writer. My love for books developed from a very early age since my mother, who is a Russian language and literature professor, instilled the appreciation for reading and writing in me. I was born in Novi Sad, and this is where I live and work. I wrote the novel „Dodir Odaje“ („Touch Gives it All Away“) with my best friend Nikola, and I am very proud to have co-authored the book with him. We have already had an initial success with our book with over 200 people attending its official promotion. It seems that people have recognised the sincere emotions which we, if I may say, rather bravely interspersed the novel with. Many people are predicting that our novel will see its second edition in January, which makes us so happy. I am also the mother of two boys – Mihajlo and Arsen – who have given the deepest meaning to my life. They are my inspiration and the biggest muses. 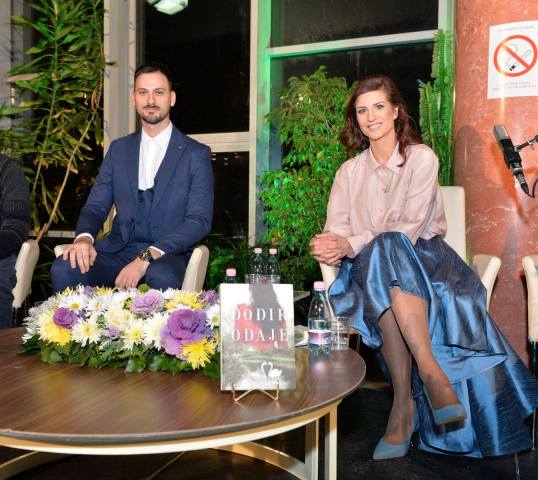 I am Nikola Garovnikov and I was also born in Novi Sad, in a wonderful family who has always supported and believed in me. I met Ksenija in elementary school, but only in gymnasium we became the best friends and shared the same classroom desk for four years. We often skipped classes together too. I graduated from the Faculty in Civil Engineering in Novi Sad and continued my specialisation studies abroad. Every step I made on my life path has certainly found its place in the first novel I have ever written or rather co-authored with Ksenija Ćaćić called „Dodir Odaje“. I am very passionate about writing and I can reveal that Ksenija and I are already working on our second novel which is supposed to be released in the autumn of 2019.

2. Many people claim that we are living in a time of shallow emotions, superficial communication, passing relationships and fear of love. If that is true, why did you decide to write a novel about love?

People who are spiritual authorities say that the previous millennium was the millennium of medicine because of the big medical breakthroughs. They also claim that we have entered the millennium of spirituality. People are awakening and starting to listen to their inner selves and their alter ego, which is something that many of us, living in this modern day and age, have perhaps neglected and forgot. If we were to believe the spiritual pundits, we sincerely hope that the phrases like „shallow emotions“ and „superficial relationships“ will be the thing of the past and that we are going to discover opportunities for deepening of interpersonal relations, the love that we give and the attention that we get. There is a saying that goes – „what you give, belongs to you“. If we give love, it is created within us and it lives in us, thus making us better people. Consequently, we are proud to open the covers of a deep and sincere love novel that could reach the innermost corners of ourselves; the corners that we forgot they existed.

3. How difficult is to write a book in this modern age, plus publish and promote it? What advice would you give to someone who is dreaming about writing a book but is anxious about the complexity of the process? 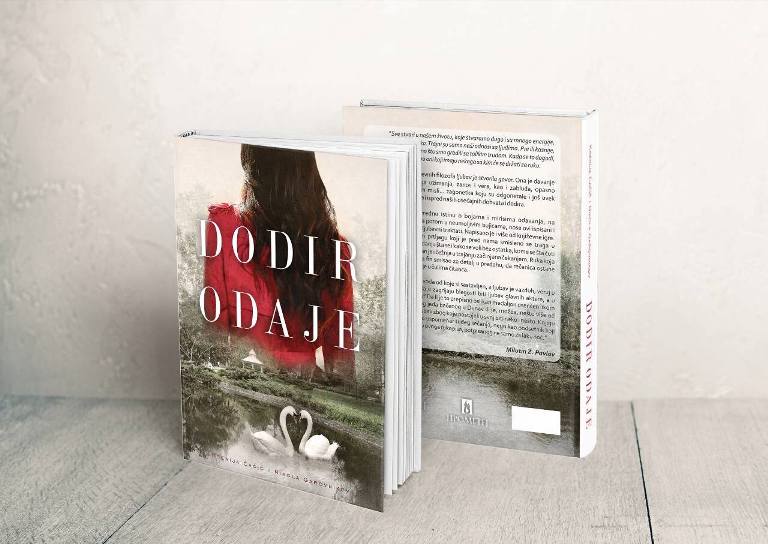 People who show the tendency to write, have a desire to write and are inspired to do so, should, in our opinion, find time to write and give it a try. After the first few written pages, they will feel accomplished and animated. This feeling of fulfillment will surely be with them until they finish the work. At least that was the case with us. Creativity feeds us and we need to water and nourish it.

The moment you encounter problems is when you try to find a publisher to back you up.  Most of them are publishing foreign best-sellers translated into Serbian, or novels written by domestic celebrities. For that reason, the majority of new writers are opting for publishing their own manuscripts. If they do so, they also need to work on promoting and selling their books which is very demanding, both time- and money-wise. We were lucky that our book was seen by the writer and one of the best reviewers in Novi Sad, Mr Milutin Ž. Pavlov and that it touched him on a very deep level. He was moved so much that he wrote a six-page review of our book without even knowing who were the book’s authors (the copy that he read did not have that information). This review is now the afterword in our book. After he wrote the review, he went on a quest to find the book’s authors and together with us, came up with an idea of the exact same book promotion that we subsequently had.

4. There is a saying in the English language that goes: “Never do business with friends or family. You will lose money, or patience, or both.“ Since the two of you have been friends for a number of years now, did your friendship provide an additional impetus to the process of writing this book? Did you find yourself in the situation where you doubted the idea of a book having two writers who, on top of it all, were also close friends?

Nikola: Such thought never entered our minds! We have known each other for such a long time, we think in the same way, we know how the other person breathes. Our writing style simply required of us to give it our best and that’s what we did. Ksenija would write one chapter and then mail it to me. I would amend it and write the next chapter which I would then send to Ksenija to approve, together with her amended chapter. So on and so forth…Until the book was finished. Vanity could have been the potential source of problems, but thankfully, we were self-critical enough and our relationship is very honest and egoless. We could even say that we are each other’s conscience and best friend.

5. Could you tell us something about the book, the story and the main characters without revealing too much?

This sublime love story was created as a synthesis of our life experiences, but also of the experiences of the people around us who touched our lives. The story is told through the eyes of the main heroine, born in Sremski Karlovci, and it covers a period of one year of her life. The book is abundant both in dialogue and deep monologues, and it contains a wealth of short historical anecdotes and descriptions. The dramatisation is mostly located in the heart of Vojvodina – Novi Sad and Sremski Karlovci – but the book’s dimension is enriched with the stories that take place in other cities in Serbia and the region.

At first glance, the story’s timeline might seem unimportant but it is clear that it takes place in the early 21st century given the depiction of certain well-known events and the economic situation concurrent with the period we live it which are only seemingly taking a back seat in the story. Through a vivid and thriving game of life, we tried to raise certain eternal questions and invite readers to find the answers to the questions themselves. Do you truly love only once in your life, or do we get a second chance at love? We are confident that you won’t be able to put this book down once you start reading it. Its main premise is a desire to touch those who live life fully, but also those who are merely existing with the idea of who they are supposed to be rather than live who they truly are.

Through the colourful emotional ups and downs of the main heroine, readers are offered a slightly different view of the fear of giving and letting go. We hope that we have revealed a lot about the book without actually doing so.

6. Finally, how did the official promotion of the book go? Where can we buy the book? Is there one person that you would like to extend special thanks to because they were crucial in your book ‘seeing the light of the day’?

The first promotion of the novel ‘Dodir Odaje’ was a great challenge for us, primarily because of the number of people who were interested in coming and getting the book. We had to find a venue big enough to accommodate everybody and to make them feel pleasant and comfortable. The preparations were strenuous, but in the end, it was all worth it. We had prominent speakers and book critics – the aforementioned writer, reviewer and the winner of the most prestigious domestic literary awards, Mr Milutin Ž. Pavlov, the founder of the Tiski Cvet publishing company, Mr Sima Matić who has released over 300 titles so far, Director General of the Novi Sad Library, Mr Dragan Kojić, doctor of literary sciences and one of the most esteemed literary critics in Vojvodina, Ms Dragana V. Todoreskov and the acclaimed actress of the Serbian National Theatre, Ms Gordana Dimić who read the passages from the book in a uniquely emotional way. 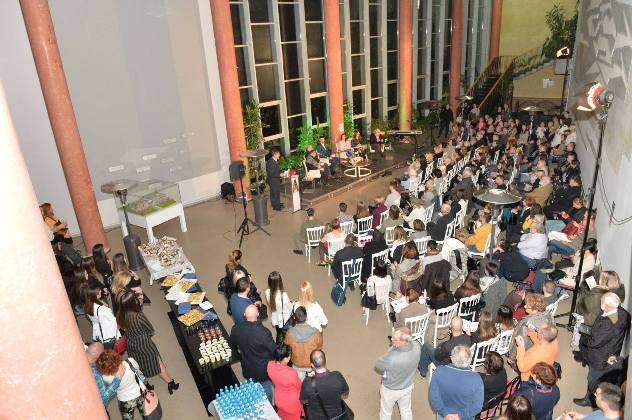 We had another premiere at our promotion – it was the performance of the eponymous song ‘Dodir Odaje’ which will be released soon on our Facebook page. Modesty aside, the 200 people who attended the promotion and the guests who participated in the programme all agreed that this was the best and the most successful book promotion they had ever been to. We think it would be unfair to single out one, or even a few people who contributed to the release of our novel. We have invested a lot of effort into it, many people supported us and were wind to our sails, in addition to trusting and helping us. We are truly grateful to all of them, and with this feeling of gratitude, we will continue to create. 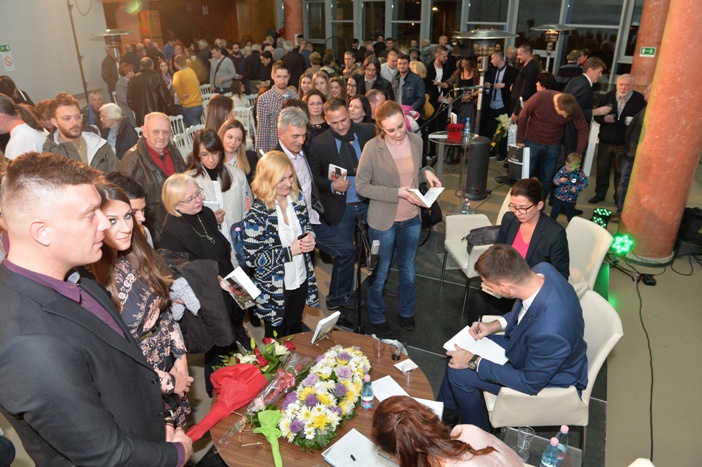 You can buy the copy of the book ‘Dodir Odaje’ on the website www.prometej.rs , on the official Facebook and Instagram page (Roman Dodir Odaje), as well as at the Most bookstore, 22, Zmaj Jovina Street, Novi Sad. Soon the book will be available in bookstores across Serbia.