Even in diplomacy, the COVID-19 pandemic marked a distinct before-and-after period. Alliances have been created or have come out the pandemic even stronger as well as historical and recent oppositions have intensified, inside and outside European borders. For the first time, the global contagion has also led to, in some way, global responses and strategies, with the main geopolitical actors in the world committing to addressing the consequences of the virus not only in their own countries, as well as committing to supporting friendly countries on all continents. The European Union, USA, China, Russia and the Emirates, among many others, have put into practice aid initiatives at various levels, often competing to cover greater areas of cooperation and to strengthen their image in the various countries.

Italy, as one of the countries most affected by the coronavirus, has aroused strong emotions everywhere, especially in Serbia, where the persuasion of a historical affinity between the two peoples is widespread. We asked the Italian Ambassador to Serbia, Carlo Lo Cascio a series of questions regarding political and economic prospects of cooperation in the post COVID-19 period. 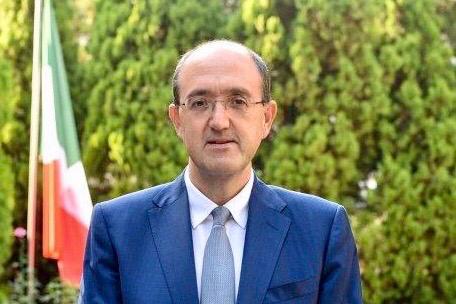 1) For the first time since the establishment of the Italian republic, there was no reception on 2nd June in the Italian diplomatic missions worldwide. It is a decision that brings the tragedy that our country went through to the attention of the entire world. What message does this decision send out?

This is a highly symbolic decision that has been made out of respect for the victims of the coronavirus epidemic in Italy and around the world. For this reason, like all my colleagues in the Italian diplomatic-consular network, I broadcast a video message on the occasion of the Day of the Republic, the day when the whole country wanted to gather around the many families who lost their loved ones, but couldn’t. In my video message, I invited people to trust Italy and the future and to that end, I encouraged the Italian community in Serbia to move forward with renewed impetus, creating new opportunities for collaboration with Serbia and even more zealously promoting the “Made in Italy” label in the Serbian market. Even during the state of emergency, the Italian Embassy ​​always stood by our compatriots and businesspeople. The Phase 2 has now begun – we will continue to work together, because we must all contribute to the economic recovery and recovery of Italy’s image, which, in the world, is synonymous with art and culture, but also with entrepreneurial dynamism and industrial ingenuity.

Thanks to your commitment, diplomacy solidarity between Serbia and Italy was activated in the most acute moments of the pandemic. Could this be the beginning of a new channel of reciprocity between the two countries, alongside traditional political, economic and cultural spheres? 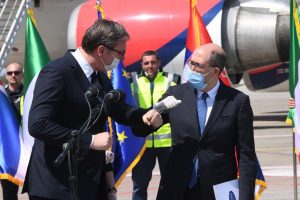 Serbia has joined a multitude of partners and friendly countries that have supported Italy during the most difficult moments of the health crisis. Serbia’s donation in medical material was an authentic gesture of friendship, destined to be recorded in the history of our bilateral relations, for which both the Prime Minister and the Foreign Minister di Maio expressed deep gratitude on behalf of the Italian people. I agree with the reciprocity you’ve mentioned – this was one of the points highlighted by President Vučić when, on 25 April, on the occasion of the departure of humanitarian flights from Belgrade airport, he recalled that Italy had always been close to Serbia in the moments of great difficulty, particularly in 2014 after the catastrophic floods hit the country. The fact that today, Serbia has been able to return the help is a cause of particular satisfaction for Italy because it demonstrates the degree of maturity of the strategic partnership between the two countries, based on solidarity, equality and reciprocal respect.

During the state of emergency, the Embassy met various needs of the Italian community in Serbia. The recovery now poses new challenges; starting with continuity of business activities for some Italian-controlled companies. How is diplomatic representation preparing to cope with this new phase?

During the state of emergency, the Embassy worked on boosting the excellent collaboration started some time ago with the associations and entities that bring together the Italian business community. We immediately took action to avoid blockage of freight transport at the beginning of the crisis, to then organizing a special return flight on March 26 and ensuring direct assistance interventions in favour of the numerous Italian companies that requested it, both on the commercial and institutional side. We will continue to represent the needs and expectations of the over 500 Italian companies that employ more than 30,000 people in Serbia in front of the Serbian authorities and interlocutors. We should acknowledge that the Serbian government has already allocated substantial resources to support the private sector, especially SMEs, and the forecasts regarding the decline of the Serbian GDP seem to be more optimistic than in other countries in the region. There is a premise to continue the promotion of “Made in Italy” products in the Serbian market, to strengthen bilateral trade, as well as protecting Italian direct investments, which growth benefits both countries. 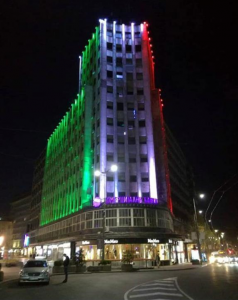 The iconic “Albania building” in Belgrade enlighted with the colors of Italian flag as a gesture of sympathy.

Do you think that Italy and the European Union’s attitude towards Serbia, following the pandemic emergency, will change?

I think there is only one answer to your question: Serbia’s place is in the European Union. This is Italy’s position which was reiterated by Prime Minister Conte during the recent EU-Western Balkans Summit, held as a video-conference and hosted by the Croatian EU Presidency, precisely to keep the European perspective of the Western Balkans at the center of the political agenda of the 27 EU countries, despite the COVID-19 pandemic. They have also validated the statements made by the Serbian political leaders who, even during these difficult months, reiterated that the EU accession remains the priority of Belgrade’s foreign policy. Indeed, there is still much to be done, so, for this reason, Serbia’s accession negotiations must now continue with a bigger commitment from both sides.

Do you think that the geopolitical balance in the Balkans will change following the pandemic? How much and how will the importance of China grow? Will the EU countries be more or less coordinated? Will the US continue to push for a negotiating solution for Kosovo or will it focus only on restarting its economy?

The pandemic has acted as an accelerator of certain geopolitical dynamics that had already been underway, but few believe that it is sufficient in itself to modify them. Individual alliances and foreign policy priorities globally do not appear to have been called into question. This is demonstrated by the attention to the European integration process which we spoke about earlier. It is evident that, in a world with ever-increasing multipolar tendencies, the debate on geopolitical choices appears very lively and that there is the emergence of new stakeholders in regions where traditionally they were less present is, therefore, benefiting from a certain level of resonance. The important thing is to talk about all these developments in the context of a constructive confrontation between the various actors, which is possible only by favoring multilateralism. Against this background, the dialogue between Belgrade and Priština is undoubtedly one of the processes that can benefit from the support of the international community and in particular, from the EU’s role of a facilitator and the support of the United States. I do not believe that the commitment of like-minded countries to this important dossier will decline in any way.

As a keen observer, do you believe that the pandemic has reduced or increased the interest of companies and businesspeople for Serbia?

Together with the entire ‘System Italy’, the Embassy has already received numerous requests for information from company representatives wishing to travel to or return to Serbia as soon as possible. The value chains between the two countries are already very integrated, particularly in some sectors such as textiles and automotive. In many other sectors, there is enormous potential to boost partnerships that have grown significantly in recent years, like IT, energy and the circular economy. The strategic objective is to integrate the Serbian market with the European single market to which it is already inextricably linked, as shown by the figures of external trade between Serbia and the EU. The partnership between Serbian and Italian companies will continue to provide an important contribution to this gradual economic approach, which is generating benefits to the companies themselves and the citizens of both countries.

The pandemic has put Italy to the test. What contribution can foreign policy to the future, rather complicated period?

Foreign policy has proven to be a key tool for protecting national interests during the pandemic. This is demonstrated by the numerous cases of international aid that Italy got from many friends and partner countries. At the European Union level, a fundamental game is now being played to define the financial instruments to support the economic recovery. Again, it is thanks to foreign policy that Italy can make its voice heard and defend its positions. To encourage a rapid recovery of the economy, existing strategic partnerships, such as that with Serbia, will also be strengthened and the development of new areas of commercial collaboration will be fostered. In all these aspects, Italian diplomacy will continue to exclusively service the country.