“Yes, if you come to Serbia, they will give you 10,000 euro in incentives for each new job you create in and the interest rates on your bank deposits can go up to 11%”. All that is missing is a set of stainless steel pots and pans, and duvet covers as gifts for the luckiest entrepreneurs in order for them to feel as if they are in a Top Shop commercial.

All this would be as ridiculous and as irrelevant, if there weren’t for Italian “consultants” who are perpetuating, on their websites, these tales about Serbia, which are worse than misleading advertising: an indication of a “cheap” attitude towards this Balkan country that has influenced the expectations of many Italians towards the country.

Whoever basks in the strong presence of Italian companies in Serbia has no cognizance of how many companies in recent years have not finalized their proposed development projects in Serbia because they found the country less affordable than they thought and more complex than this supposed cheapness they were supposed to believe. And we are not talking about small entrepreneurs “hiding”” from Equitalia, but about the companies with the turnover ranging from tens to hundreds of millions of euro.

The limits that held back Italian expansion in Serbia even more were essentially cultural. The owners of many companies that saw internationalization as a necessary path for their growth and Serbia as a country that could facilitate that path compatible with their budgets and their organization often missed two fundamental steps: the desire to profoundly, objectively and analytically understand the country, beyond the established prejudices, the optimistic auspices and the messianic expectation of the mythical state subsidies; and the lack of engagement of young, motivated and competent staff willing to become permanent residents of Serbia, to get to know the economic-social context in depth and build the network of institutional relations, potential suppliers and collaborators to support the investment project.

While the phantasmagorical period of the ample subsidies is long since gone and bank rates have become very close to those of the Eurozone, new challenges are emerging that no “ fool-the-investor consultancy” webpage mentions.

In the last two years, the textile and footwear sector, which are at the helm in terms of the number of employees in Italian-owned companies, has experienced strong Turkish and Chinese investments aimed precisely at better serving the European reference markets of Italian companies in terms of volumes and range. These are not rhapsodic operations, but are the result of a weighted strategy of the two countries that have also invested politically on Belgrade. 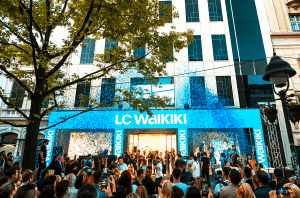 Serbia is now at the centre of the Piraeus-Budapest axis of the Road and Belt Initiative, and at the same time, a privileged and non-confrontational interlocutor of Recep Tayyip Erdoğan’s neo-Ottoman vision in the Balkans. As a result, Turkey has made textile-related investments in Kraljevo, Arilje, Smederevo, Cuprija, Lebane, Babusnica, Pirot, Nis and Novi Pazar. The investments in production are also accompanied by the investments in retail such as the one by LC Waikiki, opening a flagship store in Knez Mihajlova Street and the expansion in the Koton brand. Overall, over 10,000 new jobs will be created in the next two years as a result of these investments.

On the Chinese side, Eurofiber’s investment in Cuprija investment is all about niche marketing, while the Weibo investment in Vranje could generate up to 6,000 new jobs.

The recent, strong influx of labour-intensive investments poses an urgent problem in terms of availability, quality and cost of labour. Serbia is also rapidly reaching a point of tension in the manufacturing sector in terms of the relationship between labour supply and demand, which will lead to a growth in wage dynamics. Soon the problem will no longer be how to reduce absenteeism or incentivize overtime but how to find workers. And this not because, owing to an economic miracle, Serbia will reach its full employment potential, but simply because the workers, who are available to work in factories for low wages, are already scarce. The Serbian Development Agency has changed the philosophy of incentives, choosing to co-finance the increase in wages and not to award incentives for job creation regardless of how high the wage is. 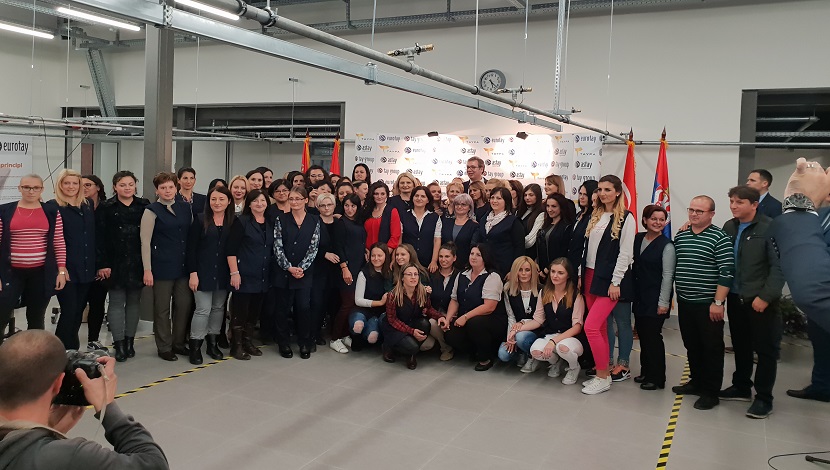 On 21st October 2018 the President of Serbia Vucic visited the turkish textile factory Eurotay in Kraljevo, that is planning to hire up to 2,500 workers.

To this new dynamic, brought on by the influx of new investments, we must add the brain-drain of the average qualified staff who are leaving to work in countries such as Austria and Germany. The second biggest city in the country, Novi Sad, is struggling with the shortage of public bus drivers while the last year alone, 22,000 Serbian citizens received Hungarian passports, delivered to the Hungarian consulate in Subotica, who are ready to apply their working skills in the European Union.

Rather than opening new companies in Serbia, oftentimes Austrian, German and Scandinavian companies rather entered into strategic supply agreements, followed by the transfer of skills and co-financing of machinery and finally acquiring a majority share in their Serbian supplier. This strategic solution made it possible for them to skip the start-up costs and concentrate their business commitment on the transfer of technology and technical and organizational competencies. Today, in Serbia, there are companies able to provide high-quality supply in the segment of mechanics, metal processing and precision components which often deal exclusively with their customers / partners in Northern Europe.

Also in Serbia there are manufacturing companies working with the latest technologies.

Undoubtedly, Serbia will remain a country with one of the most competitive labour forces in Europe, but these dynamics will have to push entrepreneurs who already operate here, or want to expand to the country to rethink the assumptions around so many investments made so far. Serbia is no longer a favourable country in terms of taxes. The taxation on business income remains at the low 15%, but thanks to digitization and the establishment of various public bodies, supervision and sanctions are becoming more rigorous. It only takes a few months of delay in delivering the monthly documentation required for a company to get a tax number for the company to be suspended. Still, many “business people” think that you can open a company in Serbia and then forget about it while waiting for good business opportunities. Digitization is starting to take effect in the country. Five years ago, it was possible to submit erroneous balance sheets with a very small risk of them being checked, while today, they are checked almost immediately.

Then an increased complexity in terms of labour costs, finding and retaining the best employees, strict compliance with deadlines and tax obligations (still far easier than in Italy). However, there is also the increased competition from the new international stakeholders who have quickly managed to build a fruitful and strong relationship with the Serbian political leadership. In Serbia, there is a concentration of geopolitical and economic interests that are not taken for granted in this small and relatively poor country. The country’s foreign policy, that in some way, is oriented towards a post-Titoist multilateralism has resulted in Serbia strengthening its relations with the countries like India, Iran, Indonesia and South Korea in the last few years, as well as constantly boosting the ties with Russia, China, Turkey and the Emirates.

On this increasingly crowded “chessboard”, Italy has not managed to organize a visit of its Prime Minister to Serbia since 2012, when the then PM, Mario Monti noted that the last Italian PM to visit Serbia before him was in 2000. These facts tell us a lot about how important is the much-bragged about friendship with Serbia is. Of course, relations between countries are not evaluated only on the basis of visits by prime ministers, but they remain an important indicator for understanding whether a country is considered of strategic importance or not.

Italy is almost totally absent in the impetuous growth of real estate and tourism in Belgrade. In infrastructure, the starting advantage at the beginning of the 2000s was eroded not only by the Chinese, Russians or Austrians but also by Azerbaijani companies. The number of Italian companies present in the field of information technology and software development can be counted on the fingers of one hand. In agriculture, the experiences of Ferrero in Sombor and the Bennet family in Zajecar are isolated cases, while the enormous national heritage in terms of competencies and organizational skills is only minimally transferred to Serbia thanks to the effective twinning programs of the Italian Ministry of Agriculture. 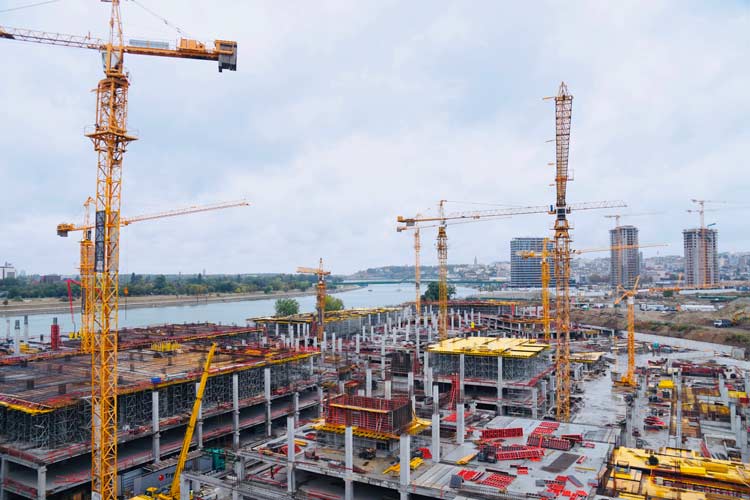 In this moment in Belgrade in every district are flourishing cranes, evidence of a strong building activity.

The list of sectors where the Italian presence could be much stronger and more structured is much longer than these ideas, but I believe that they are very aware of the fact that the potential that Serbia can offer to the Italian production and professional system is still under-exploited.

However, what needs to be done is to change the approach to Serbia and abandoning an outdated attitude where the only parameter for evaluating any offer or opportunity is cost containment.

While being aware that work or energy tends to grow while remaining at competitive costs, we must rethink the added value that cannot stop at ‘cost leadership’. In terms of internationalization, Italian companies can no longer rely on producing something of excellent quality in Serbia at low costs. This focus on mere production efficiency has led to a mechanical view of Italian investments, which boil down to relocation from a warehouse to a place where it costs less to produce.

In the competitive scenario that we have outlined here, the revival of the Italian presence in Serbia will not be a mere quantitative increase in the number of companies present or a totemic operation like the arrival of Fiat in 2008. There is the need to change the systemic perception of Serbia, which is something that could be done only through a joint effort of the Italian and Serbian institutions. Only a change in the expectations and prospects of those who intend to invest in Serbia can create opportunities that have so far escaped us and avoid at least some assessment errors due to which many projects have failed.

Biagio Carrano, director of the Serbian Monitor and eastCOM Consulting