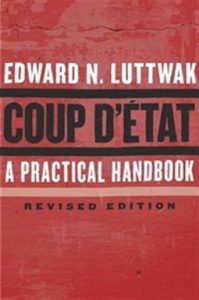 In his book “The Strategy of Coup d’Etat – A Practical Handbook”, Edward Luttwack identifies the three places that conspirators must take control of if they want to succeed: the government buildings, the buildings housing the main media and the heavy traffic locations.

In the book, that has been read by all the “operators” in the sector, it is no longer possible to distinguish whether the conspirators slavishly apply the guidelines listed in the manual of this American scholar, or whether the book has identified the definitive rules of the coup d’état.

So when the events, like those that took place two weeks ago, happen, like the storming of the headquarters of state TV stations with chainsaws and destroying the fence around the building that houses the Serbian Presidency, it is naive to believe in a casuality and one wonders, if anything, under whose direction these events took place.

The awakening of civil society 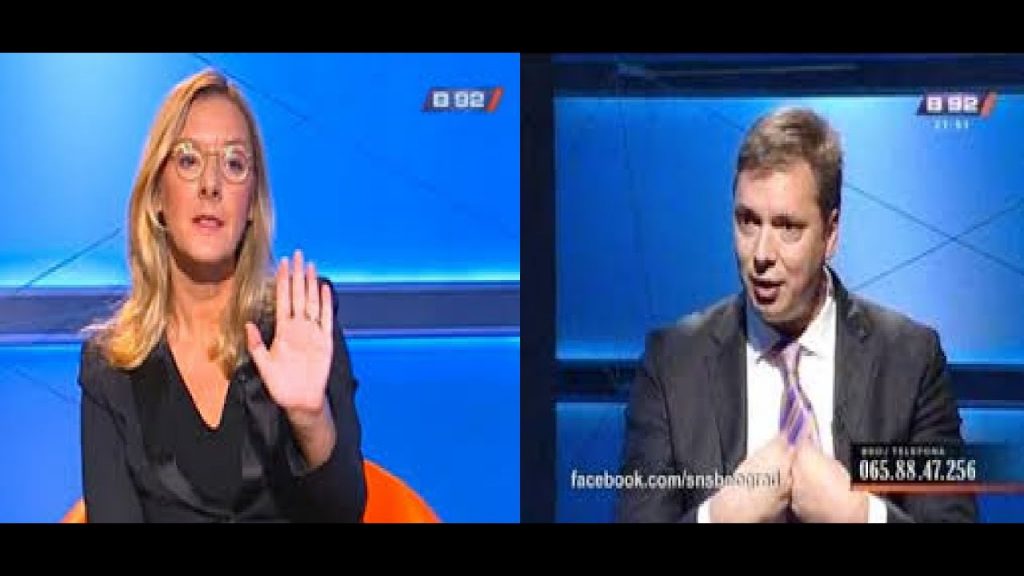 The cancellation of Olja Beckovic’s iconic political TV show “Impressions of the Week” was deemed by the Serbian public opinion as an unprecedented attack on free political debate.

Certainly, in the last few weeks, the helm-free compound protests that took place (and blocked) in the centre of Belgrade, that have spilled over from Saturdays to Sundays since December 8th, have undergone a radical and sudden change – the intolerance for the suffocating control of the media, the frustration at the economic conditions expressed by so many people who do not see any improvements, the anger at the abuses of the current authorities in power combined with a total distrust of the opposition politicians.

On many Saturdays, students, lawyers, intellectuals, actors, and never a politician took to the floor at the final rallies. It seemed that all of a sudden Serbian civil society, always evoked by many Western observers, had re-emerged from its hibernation, and appeared with a consistency unthinkable to its own members.

In many cities in the country, the #1od5miliona movement has grown week-on-week, mixing the disillusionment of the older generations with twenty years of promises and disappointments, and the younger generations’ search for someone with credibility and charisma to provide answers, to believe again and to try to do the unexpected. The peculiar fact regarding these events is that the claim of civil liberties, freedom from a pervasive power apparatus and freedom of expression thanks to free media, prevails largely on the dissatisfaction with the material conditions in a country that has been economically growing, but alas less than its neighbours.

But freedom of expression has many enemies – obviously the government, but even more so the opposition politicians who try to exploit the popular resentment.

The opportunity to “ride” this movement was too tempting for many politicians in search of visibility and a lost consensus, some at home and some in international fora, who have never given answers to the expectations that the protests raised.

The protests allowed them to proposition themselves as opposition leaders, to try to divert this spontaneous movement towards one’s own side and, last but not least, to obtain international funds for the next election campaign, which does not imply more votes but certainly benefits the bank accounts of these politicians. 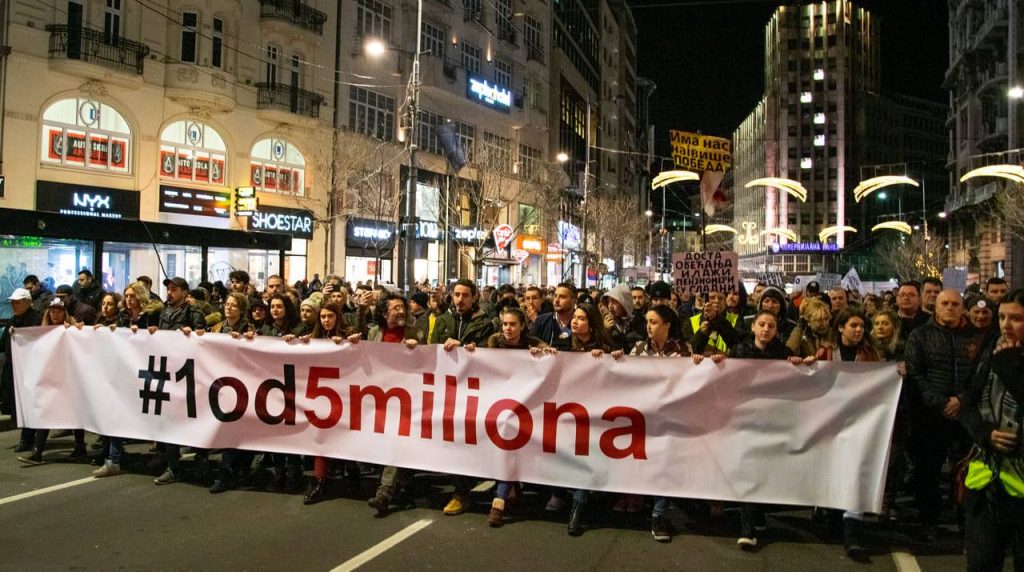 Protests have spread throughout the country, gathering almost 100,000 participants in Belgrade.

The reactionary, the tycoon, the globalist

So, after months of protests, the three politicians, who are now trying to conquer or regain sufficient political space to challenge Vucic, have emerged from the past. 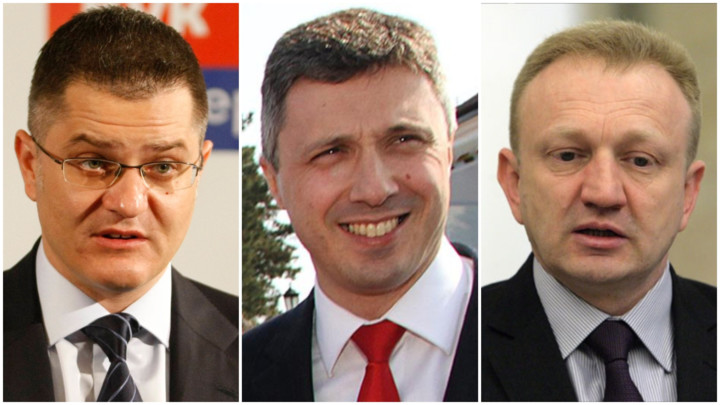 At the head of the assault on the RTS and the Serbian Presidency buildings is the leader of Dveri, Bosko Obradovic, the champion of the god-fatherland-family idea in Serbia, the hyper-nationalist of the moment, whose political platform blends the mystique of the Serbian as elected people with various conspiracy theories, economic autarky, the break with the EU and closer ties with the Russian Federation, not to mention the support for church marriages, producing numerous offspring and finally, a good dose of homophobia.

The Obradovic fella wants free media and a transparent electoral process by assaulting a TV station and state buildings, and this is not exactly the best premise.

Dragan Djilas, already the leader of the student protests against Milosevic, and since 2004, media dominus in Serbia thanks to the almost total control of advertising investments, former Mayor of Belgrade, and a man who presided over the Democratic Party when the party hit the all-time low in the popular support of only 6% also thanks to the former President of the Republic, Boris Tadic and the then President of the UN General Assembly, Vuk Jeremic leaving the party. Accused of having increased the turnover of his companies by 800% after he became a politician, today he advocates media freedom when, for years, he controlled them by opening or closing the tap of advertising investments.

Vuk Jeremic was the wunderkind of the socio-economic elite, first Yugoslav and then Serbian. He spent the terrible 1990s studying at the best English universities and then was immediately co-opted in relevant positions following the fall of Milosevic, only to become, in 2007, the Foreign Minister and President of the UN Assembly in 2012 and 2013. There is perhaps no politician who is, in terms of life experiences, more distant from that of ordinary Serbian people in the last 20 years as Jeremic, who was at the brunt of ironic jokes for having participated in the March 17th demonstrations with a revolutionary fervour, wearing jeans, a T-shirt and a military shirt, as well as a 15,000 euro wristwatch. Not really the best person to represent the economic hardship of many Serbs.

The verbal altercation between Vuk Jeremic and Cedomir Jovanovic, who were both the
opponents of Milosevic in their younger days, both enfants prodige of the Democratic Party
and both current opponents of Vucic, reached cabaret levels during the “360 degree” broadcast on March 7th.

The disconnect between the elite and the people

These generic portraits aim to highlight a much more important aspect of the individual biographies – the political desertification of the democratic, liberal or socialist cultural area in Serbia in recent years.

This is an area that has always been a minority in Serbia and before that in Yugoslavia; the liberal part of the policy that Tito called “To je drugi koncept, druga pozicija” (in translation “This is the other concept, the other position”). In the last eighteen years of opening up to the market economy, the demands of social promotion have not found a mass social democratic party capable of interpreting them in terms of political action.

Take for instance Boris Tadic’s Democratic Party, a member of the Socialist International, which, in the moments of its maximum consensus, received plenty of votes from people living in well-to-do neighbourhoods in Belgrade, and let the other parties, namely Seselj’s radicals, represent the discontent of the most disadvantaged segments of the population. In addition, the Democratic Party failed to sufficiently promote the rule of law and civil rights, social inclusion by merit, and the fight against economic potentates that strangle the free market to the detriment of people’s living standard.

Today, more than 80% of Serbian parliamentarians can be called right-wing or extreme right-wing, while the socialist party represents only the tradition of its power. The same aspiring leaders mentioned above are all between the right and the extreme right. Paradoxically, if you consider that the protests started after the attack on Borko Stefanovic, the only politician to have founded a left-wing party in recent years, this shows an important fact regarding the irrelevance of a political area.

Attempts to rebuild a social democratic platform, like the Free Citizens Movement created by Sasa Jankovic, have been compressed and made to fail by the pressures of the current regime but even more by the inadequacies of its leaders. The new leader of the Movement, the actor Sergej Trifunovic, insulted the leader of the social-democratic autonomists of Vojvodina, Nenad Canak (already a close ally of the Democratic Party) at a rally in Novi Sad, with an exchange of insults continuing on social media, resembling a fight that takes among drunken guests at a dilapidated local kafana. On the other hand, Savez za Srbiju (Alliance for Serbia) which brings together Djilas, Obradovic and Jeremic with other minor politicians, is a right-wing opposition to a right-wing prime minister.

At the basis of all this, there is also a historical difficulty of the most modern, urban, open, socially sensitive classes to relate to the people, especially those living in the peripheral and rural areas. The intellectual elites, even the leftist ones, have always felt quite distant from these people.

Serbian political leaders have always tried to represent themselves in relation to their people through a certain “theatre for the people”, the representation of themselves, or through a studied commonality, or as a transference of collective material aspirations, mindful of Tito’s lessons. Even the relationship between these urban elites and the rural community people, which still carries so much weight in the country, is unresolved, suspended between the Arcadian representations of the farmer motherland and the distance from a world seen as obtuse and retrieved.

A social, not just an election victory

Thanks to the push from below, the demonstrations continue to take place each Saturday, but with less momentum. The movement oscillates between stubbornness to continue despite the politicians highlighting their differences in relation to them, and the awareness that without some credible leadership, they will be condemned to irrelevance.

But the mistakes of the aspiring leaders of the protest are beginning to accumulate week by week, so a few more instance of violence or more internal conflict will end up the ideal scenario for Aleksandar Vucic, namely for him to act as the sole guarantor of the social and political stability of the country, claiming ownership of and protecting the economic growth of recent years, and legitimizing himself once again as the only advocate of Serbia on the international political scene.

The choice of the date for the early elections, whether in June or next spring, will be made on the basis not only of the polls, which already give Vucic’s SNS close to 50% voter support but on the basis of the progressive evanescence of the active support to the protests. This is not a question of winning yet another electoral victory, but of normalising the social framework by demonstrating the total inanity of the opposition.

At this point, Brnabic’s re-appointment as Prime Minister seems almost obvious, based on her ability to speak to that part of the country that pursues not only technological but also social modernization.

Serbia will remain a separate nation within it, cohesive only around some collective mythologies and sports successes. Frustration and regret will remain in the background of the Balkan fatalist vitality that fascinates foreigners so much. Until the next wave of discontent.