Marriage out of convenience, political reasons, and territorial aspirations was nothing new in medieval Serbia. Serbian rulers often took wives that could bring them more power, recognition and alliances, and also quite often, those wives were foreign.

If we look at nationalities of the wives of the Serbian kings and emperors, most of them were of Greek (Byzantine) origin – ten of them. Eight were Serbian, four Bulgarian, three Hungarian, two Italian and two were Romanian. Also one Serbian queen was of the mixed Albanian / Greek origin, and there was a French one too, perhaps the most famous and most fondly remembered of them all.

Out of thirty three wives of Serbian rulers, only four were not of noble descent, but ordinary civilians, with the King Aleksandar Obrenović being the last monarch to take a wife who was not of “blue blood”.

Some of the queens, like Eudoxia (also known as Evdokia) had a horrific destiny, while some, like Irene Kantakouzene, were so hated that she earned the nickname “The Damned Irene”.

Here are the stories, trials and tribulations of the four foreign noblewomen who stole the hearts of the Serbian rulers and changed the course of the Serbian history.

King Stefan Uroš, the third son of the King Stefan the First-Crowned (Stefan Prvovenčani), was not married to a Greek or a Bulgarian princess, unlike his brothers. As the son of a Venetian woman, Anna Dandolo, he also wanted a wife from the West, and found her in Helen of Anjou, who did not want to renounce her Catholic faith and take Orthodoxy. Still, this did not prevent her from instigating construction of many churches, both Orthodox and Catholic, and as such being equally respected by Catholics and Orthodox Christians. 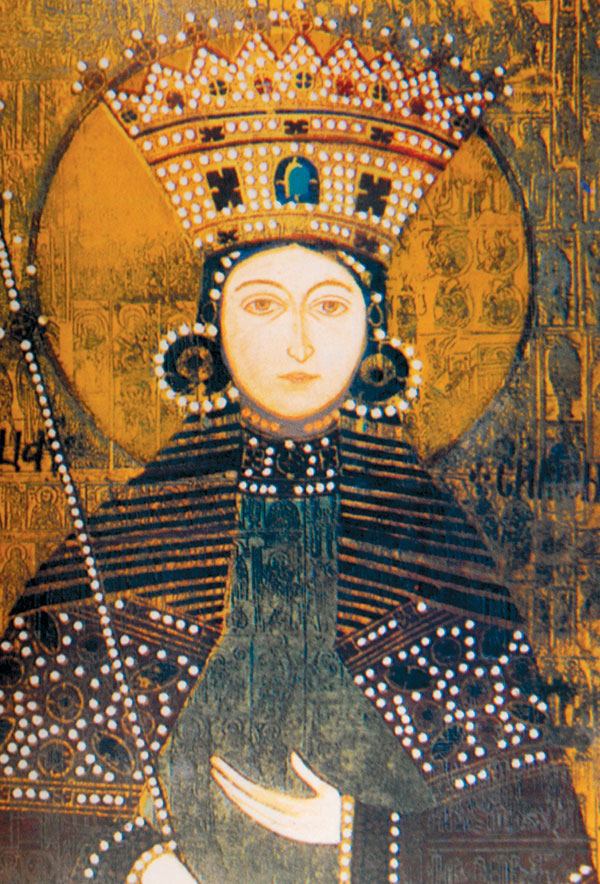 She succeeded, at least for a while, to reconcile the papacy and Serbia, which nobody had managed to do before her, not even popes, patriarchs, the kings. Helen of Anjou was also known as being selflessly committed to the Serbian people, who, in time, accepted her as one of them. She is also one of the very few members of the royal family who received sainthood from the Serbian Orthodox Church.

Stefan Uroš married Helen sometime around 1250 (there are no precise historical records to corroborate this). The legend says that he was so besotted with her that he planted lilacs, her favourite flowers, in many areas of Serbia in honour of their wedding.

Helen, who was the daughter of a Hungarian nobleman and a French aristocrat Matilde de Vjanden, took her role of the queen very seriously. She founded the first ever all-girls school in medieval Serbia, in the town of Brnjak in Kosovo. She also encouraged transcription of books, which she later gave out for free.

Furthermore, she was a staunch opponent of royal elitism, and was known for frequently opening her doors to the poor and downtrodden. Helen was the first queen to open a library at her court, and was a patron of many monasteries which she helped to build, including the Gradac Monastery.

She lived to the ripe old age of 78, outliving her husband who died when she was only 36. Near the end of her life, she became a nun in the Gradac Monastery.

Eudoxia, the first wife of the King Stefan the First-Crowned (Stefan Prvovenčani), came from Greece, or as it was called in the 12th century, Byzantine Empire. She was the daughter of the Byzantine emperor Alexios III Angelos and was known as being very beautiful, cultured and educated. Stefan and she married in 1191 which also marks the year the official establishment of the political links between Serbia and Byzantine that continued all the way into the late Middle Ages. 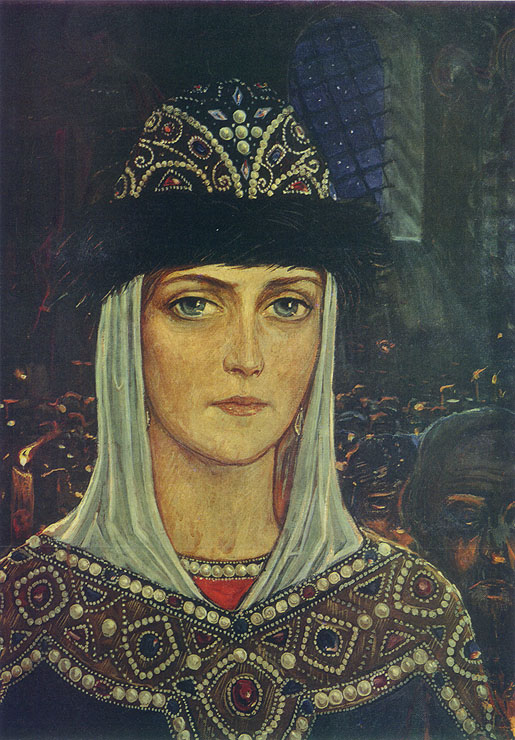 Eudoxia was not known for her faithfulness towards Stefan and there were many stories about her cheating on him and even contracting a sexually transmitted disease. In the beginning, the marriage between Eudoxia and Stefan functioned pretty well. They had four children – three sons and one daughter. However, once Stefan was crowned as the new Serbian king, the rift in their marriage started to show. Because of her outstanding beauty, Eudoxia was constantly attracting a lot of attention from the male population which Stefan could not stand. They frequently accused each other of being unfaithful.

In 1201, Eudoxia was expelled from the Serbian court, which also marked the end of her 10-year-marriage to Stefan. Before her expulsion she was publicly stripped off her clothes and put to shame. After Stefan, she married two more times. Her second marriage, to the Byzantine emperor Alexios V Doukas Mourtzouphlos, who overthrew her father from the throne, was out of love. Her third marriage was to the Scion of Corinthia, Leo Sgouros, a ruthless, blood thirsty nobleman. Sgouros committed suicide in 1208 after being captured by the Latins, while Eudoxia died only three years later.

Irene Kantakouzene, known simply as Despotess Jerina, was the wife of Serbian Despot Djuradj Branković. In Serbian folk legends, she is the founder of many fortresses in Serbia.

Irene was the second wife of Djuradj and, as legends would have it, although very beautiful and educated, she was one of the most hated Serbian queens because of her cruelty towards the ordinary people, frequent nepotism, and great personal political ambitions. 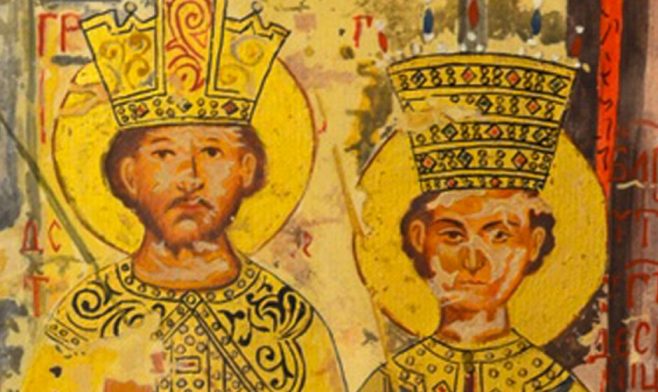 Irene had a strong influence on Djuradj and served as his political consultant on many occasions. The nickname “The Damned Irene” was given to her after her cruel treatment of the people involved in building of the Smederevo Fortress. She was also blamed for causing hardship on the inhabitants of the countryside by levying taxes and recruiting forced labour for building the fortress. A few years on, the fortress traded hands between the Serbians and the Ottomans until it fell on 20th June 1459, more than two years after Branković, and then Irene, had died.

Irene’s downfall started after Djuradj’s death. She suffered a series of personal tragedies – the death of her son Todor, the forced marriage between her stepdaughter Mara and Sultan Mehmet II and blinding of her sons Stefan and Grgur.

According to the historian Kritoboulos, following the death of Djuradj Branković, his youngest son Lazar became Despot under Irene’s regency. However Lazar swiftly deprived her of all authority and treated her so badly that she tried to escape to the court of Sultan Mehmet II with her stepdaughter Mara and her blind son Grgur. Lazar pursued them, and captured Irene although Mara and Gregory successfully escaped. Irene soon became ill and died on the night of 2rd – 3rd May at Rudnik, where she was buried. Theodore Spandounes, a 16th-century historian, claims that Lazar poisoned her.

Helena was a Bulgarian princess, the daughter of Sratsmir of Kran and Keratsa Petritsa, and the sister of the emperor Ivan Alexander of Bulgaria. Helena married Serbian King and later Emperor Stefan Dušan (1331- 1355).

At the time of marriage, the Bulgarian Empire was suffering from a rapid decline while the Serbian Empire was experiencing expansion, unseen of before. From the very beginning of their marriage, Helena was very supportive of her husband and encouraged him to work on making Serbia even more powerful. The marriage was very loving but it went through a crisis due to the fact that Helena could not conceive for a very long time. 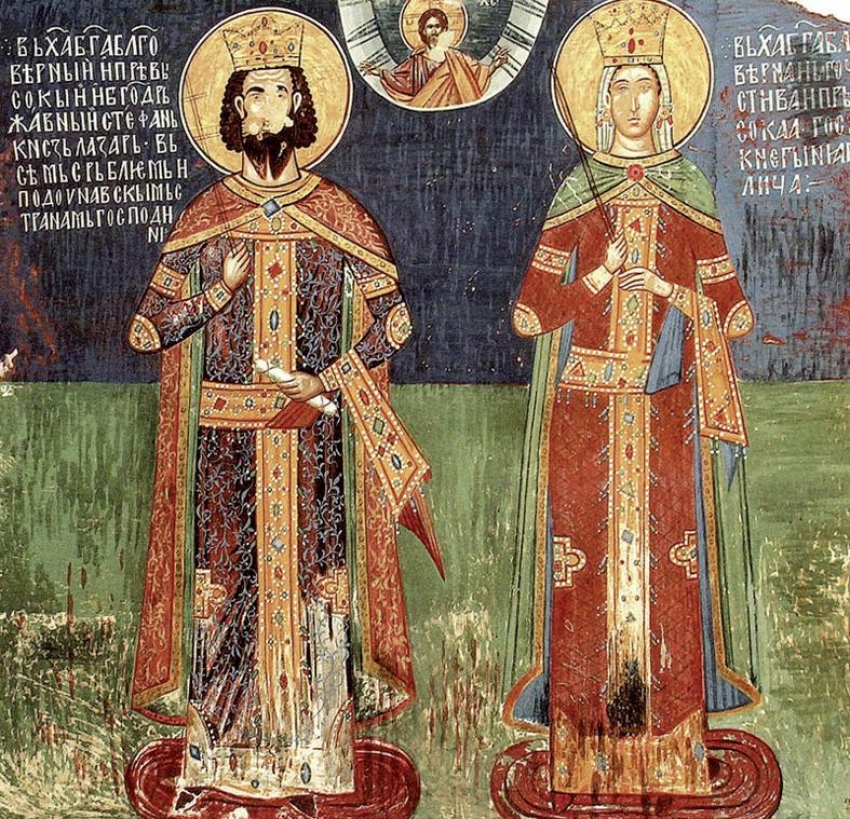 Dušan was even contemplating finding another wife, but Helena fell pregnant and gave birth to the future Serbian king, Uroš.

Helena was very influential both in Serbia’s internal and foreign affairs. She played a very important role in the process of declaring Serbia an empire and a patriarchy in 1345. In one of his decrees, Emperor Dušan calls Helena “the empress of my empire”. Although, she was a very dedicated and loving wife to Dušan, she was also known for her strong temperament. Still, she was respected because of her bravery, determination and following her husband even into battles. Helena was the only woman allowed to step foot on Mount Athos in 1347 when the plague epidemic swept through Serbia. She was given a special approval from the Serbian Orthodox Church to come to Mount Athos to escape the plague.

After Dušan’s death in 1355, Helena became a nun, under the religious name of Elisaveta, but still had a lot of political influence. Although, her relationship with her only son Uroš was excellent, she grew distant from him in the last few years of her life because, according to historians, she behaved towards Uroš “more as a political advisor, and less as a mother”. She died in 1376, five years after her son Uroš who was killed in the battle on the River Marica.