Discover the stunning churches, spas, vineyards and craft breweries within two hours of Belgrade, in towns of Topola and Arandjelovac, and the beauty of the Kosmaj Mountain.

Although the undulating hills of central Serbia have plenty of wonderful natural and historic treasures hidden among their alluring curves, actually getting to them from Belgrade is far from easy.

All too often, potholed roads make you feel like you are having a vigorous massage as the suspension of your car gets gradually wrecked. Even if you manage to arrive where you want, many sights lack any explanation of their history and significance, and chances are that unless you are not already well-versed in Serbian history, art and geography you will find them puzzling or underwhelming.

Thankfully, a visit to Topola and its environs offers a fantastic blend of history, natural beauty, as well as chance to taste some of Serbia’s best wine and craft beer, all within an easy reach of the capital.

Topola is a handsome town perched on a hill, about an hour and half from Belgrade. Although the verdant surrounding areas around it have been settled since before the Ottomans, the modern town was founded by the leader of the first Serbian uprising, Djordje Petrovic Karadjordje.

The core of the town was built around Karadjordje’s old stone house and a church where his remains were initially interred. The complex, known as Karadjordje’s town has since been turned into a museum which does a decent job of evoking what Serbia looked like at the turn of 19th century and tells the tale of Karadjordje’s fascinating life which involved patricide, rebellion, exile and, finally, betrayal by his friend who killed him at behest of the leader of the 2nd Serbian uprising, Miloc Obrenovic.

A short drive or walk uphill is Oplenac, crowned by the majestic memorial church that also serves as a tomb of Karadjordje’s descendants and the last royal house of Serbia, the Karadjordjevics. Coated in dazzling white marble from nearby Vencac, the church evokes Serbia’s medieval monasteries and rises gracefully from nearby vineyards and forests. 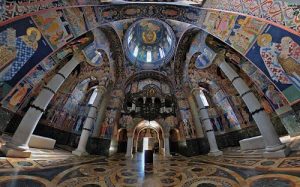 However, the main draw is the interior, designed by famous white Russian émigré architect, Nikolay Krasnov, who was responsible for Yalta’s tsarist palaces. What you will find inside is a swirl of breathtaking mosaics with scenes borrowed from Serbia’s most famous frescoes, ensconced in a glorious, cavernous church.

The crypt below, where 22 members of the family are resting, is an opulent fantasy in blue, red and gold, which retains mystique and dignity despite the bling. King Peter I Karadjordjevic’s modest summer house, a few minutes away is almost the antithesis of the church, but it also displays valuable family heirloom, including a mother of pearl icon of the last supper, which was coveted by Goebbels.

After visiting Oplenac, you may want to take a walk around the vineyards of Topola or even visit the royal winery close by, which produces fantastic full bodied wines. There are many new wineries around (including very the popular Aleksandrović wine cellar) which can easily be visited if you notify them in advance.

A short drive through the rolling hills surrounding Topola is one of Serbia’s most famous spa towns, Aranđelovac, nested in the shade of Bukulja mountain. The spa was built in the mid 19th century by the Obrenovic dynasty to be the Serbian equivalent of Baden Baden and Karlsbad, where a fashionable crowd went to consume sulphuric waters. The complex was crowned by the old summer palace of the Obrenovics, which later became a grand hotel, only to fall into disrepair in the last decades due to a dysfunctional privatisation.

Nevertheless, it offers a sense of faded grandeur, a bit like the more decrepit Grand Budapest Hotel of Wes Anderson’s film.

The spa park has a charming collection of marble sculptures, a lovely art-nouveau pavilion immortalised on the Knjaz Milos mineral bottle label. Although the fashionable crowd has disappeared, you can still drink the curative waters from the fountain or hike up Bukulja.

An hour on the scenic route towards Belgrade takes you to Kosmaj, Avala’s higher and more peaceful cousin. Belgrade’s highest mountain is perfect for gentle hiking in spring when its forests are carpeted with bluebells. Recently, Kosmaj has become more popular with Belgarde’s hipster crowd due to its craft beer and a socialist-era monument. 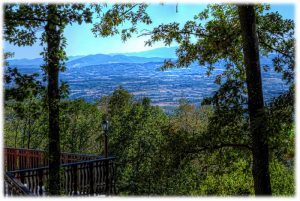 The beer in question of comes from Kabinet brewery, housed in a sleek concrete building in Nemenikuće. Serbia’s most successful and stylish craft brewery, Kabinet does not as yet offer tours, but has a shop where you can buy a good selection of their cool beers. If you really want to get the local flavour, try Melisa, a pale ale infused with herbs from Kosmaj.

The best place to enjoy your beers is from the nearby Yugoslav-era monument dedicated to the local partisan fighters in WWII. Built to evoke a rebellious spark in the people of central Serbia, the star-shaped monument combines five huge concrete chevrons perilously balancing towards the centre. The dramatic monument is regularly featured on lists of quirky socialist architecture and is sure to give your Instagram profile a boost.

Once you have soaked up the mountain air, it is just an hour away from Belgrade, or if you decide you haven’t had enough rest from smog, a short drive to spa hotel Izvor back in Arandjelovac or Hotel Babe in Kosmaj.