Prime Minister Ana Brnabić said that at the protest held yesterday in the northern part of Kosovska Mitrovica, Serbs demanded the full implementation of the Brussels Accords, signed almost 10 years ago.

As Serbs gathered in Kosovska Mitrovica for the protest, Brnabić wrote on Twitter that it is once again necessary to remember what the Kosovo Serbs demand, not only from the international community but also from all those who seek to disseminate false information, brutal lies and defame the Serbs in Kosovo and Metohija, President Vučić and the Serbian government. 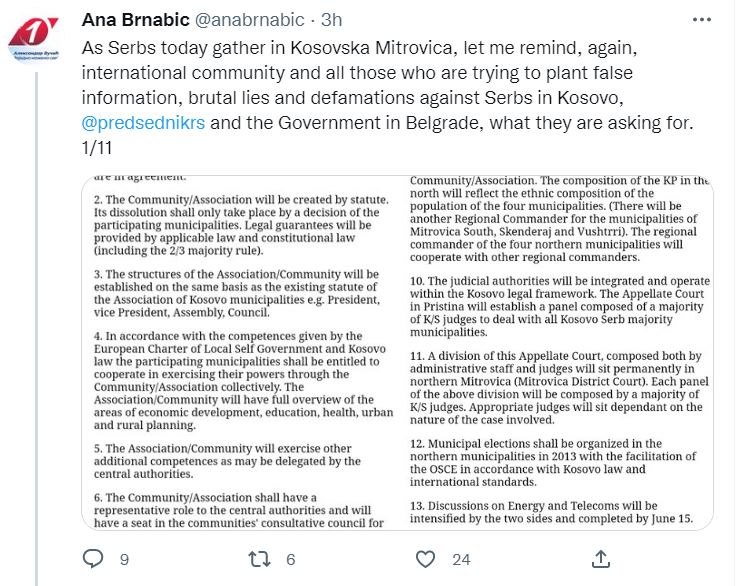 In her tweet, the prime minister recalled that Kosovo Serbs “are demanding the full implementation of the Brussels Agreement, signed almost 10 years ago (!), on 19 April 2013, as the first principle governing the normalisation of relations between Belgrade and Pristina. ‘Nothing more and nothing less’, stressed Brnabić, who also pointed out that the Brussels Agreements have only 15 points, six of which provide for the establishment of the Union of Serbian Municipalities in Kosovo. She added that that was the only thing that Pristina should do.

“What did the Serbs in Kosovo do yesterday? They suspended their participation in the Temporary Institutions of Self-Government in Pristina – the ones they became part of in accordance with the Brussels Accords, the same Accords that Pristina not only ignores, but openly states do not apply to them. Why now? Well, because (Albin) Kurti not only says that he does not recognise the Brussels Accords (‘They may exist in Belgrade and Brussels, but they do not exist in Pristina’, he said three days ago in Berlin), but has also initiated the collapse of the institutions created by the Brussels Accords”, Brnabić went on to say.

By way of example, she said that Article 9 stipulates that for the four Serb-majority municipalities in the north (North Mitrovica, Zvečan, Zubin Potok and Leposavic), there should be a regional police commander and that the police commander of that region should be a Serb appointed by the Interior Ministry from a list drawn up by the four mayors on behalf of the community/association. Brnabić further underlined that Pristina cannot appoint a regional police commander for the four northern municipalities where the majority are Serbs, nor can anyone in Pristina replace or dismiss that person. 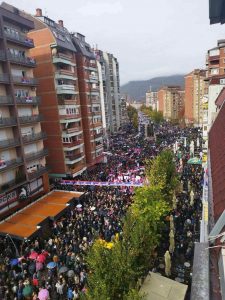 “And Kurti did exactly that: he fired the police commander and thus violated the Brussels Agreement. And this is just the last drop in a glass full of irresponsible statements and actions directed against the Brussels Agreement,” said the Serbian Prime Minister, who reminded that the Serbs demand full implementation of the agreement signed in Brussels by Belgrade, Pristina and the EU High Representative.

“To all those who are irresponsibly drawing parallels with Ukraine and Donbas and say other nonsense, do you really think that demanding the implementation of international agreements with EU mediation is too much? Or is it a sign of trust in the EU and the rule of law?” wrote Brnabić.