Journalists, historians, geopolitical analysts; anthropologists, sociologists and ethnomusicologists; experts in economic, social and cultural development; professionals in international cooperation; entrepreneurs with decent readings  and scarce capital. Then come very low-cost travelers, fans of the cinema of the former socialist countries, lovers of fanfares and tympanums, nostalgic for Yugoslavia born after its dissolution; lovers of local attractions, landscapes and women; fans of kafanas and related mythology, avid tasters of various types of rakija loza lincura mastika, gourmands in search of “authentic” food and especially in abundant portions and at low price; young or formerly young people more or less lost in search of themselves. This varied humanity, so partially outlined, wanders in the south-eastern corner of Europe driven by various needs and passions, including study, work, material needs, social absconding, entrepreneurial opportunism or existential escapes and when they do, they find themselves to be united under the term or defined as “balkanologists”.

But what characterizes a balkanologist? Obviously the Balkans. But what is the Balkans? A geographical entity, an idea, an aspiration, nostalgia, an illusion, a prejudice? A recent concept in the history of the continent, it inevitably suffers for this a certain halo of indistinctness, within which everyone falls and adapts their own aspirations and prejudices. The Balkans is actually the most imaginary territory of this promontory of the Earth called Europe.

As I explained in the twin article, while Balkanism describes the relationship of power and domination that other European countries have established with the Balkan countries, Balkanology could be defined as the sentimental reaction to Balkanism.

That is why a balkanologist lives an emotional affiliation with the territory called the Balkans, which for him becomes a state of mind.

Balkanologist has a sincere passion for his imaginary Balkans as the examples in literature, cinema, music and direct or indirect experiences confirm his afflatus for those places and those peoples. Therefore, unlike the more committed Balkanist, the Balkanologist does not want to redeem the Balkan people, he does not want to bring them towards a “European” civilization, but he wants to protect this ancestrality, no matter if its tradition is only a few decades long or is the result of stereotypes developed during the wars from the 1990s.

The judgement on the backwardness of the territories he shares with the Balkanists, does not evoke pity but sympathetic fascination in the Balkanologist.  Thus the Balkanologists tell of an “ancient” “legendary”, “magical” territory, with proud, anomalous populations and sudden outbreaks of ancestral violence, abandoned villages and immiserate cities, but also where they rediscover the inner freedom that Western civilization has compromised, a sort of “far west” unexplored to the east of the orderly central-western Europe, where they can develop a dimension of their existence that is more authentic, original and naive in the etymological sense of the term. 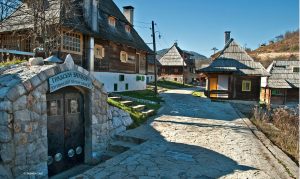 Many balcanologists would love to discover the Balkan villages similar to Drvengrad, the etnovillage built by Emir Kusturica a scenic design of the movie “Life is a miracle”.

The Balkanologist dreams of the Balkans as a sort of open-air anthropological zoo, where, in the most inaccessible valleys, you can discover peasants singing atavistic songs in typical folk costumes, find yourself in a popular wedding with the Roma fanfare, recognize in the grimmest taverns the criminals who have returned from the wars of the 1990s and maybe drink a glass of rakija boldly together.

For the Balkanologist, the 1990s should have never passed, as then there was the concentration of all the subsequent Balkan mythology: the regrets for the decline of socialism, the privatizations and smuggling that made people wealthy overnight,  the crime that ruled the cities, the laws that were applicable only to the naive and the poor, the flaunted luxury, the peasants that were scarred by the general impoverishment, the immersion in the nights of rowdiness and sensuality, the alcoholic evenings shared between fellow journalists when the Balkans took you to the front page, and the great cooperation projects which filled the pockets of humanitarian aid professionals.

The cities should therefore remain motionless to contemplate the memory of those years: “The bombing [of 1999] transformed the Generalštab (Editor’s note: the building of the General Staff of the Serbian Armed Forces) into a sort of ‘natural monument’ of Belgrade”, “the space for confrontation and conflict between the Serbian people and the international community“. A pivot that functions as “a metaphorical urban scar that starts to bleed again on special occasions” [in the Balkans not only Virgin Marys get to bleed, buildings do that too]. “The idea that the Generalštab could become a luxury hotel makes me uncomfortable, because it would mean depriving the Serbian society not only of one of the most remarkable examples of Yugoslav architecture, but also of a precious opportunity to create cultural memory,” said urban semiologist Francesco Mazzucchelli five years ago. The Belgrade citizens, who pass in front of a gutted palace every day, would give answers that were very different from these lucubrations. And let’s imagine what the reaction would have been if in 1960 an Italian semiotician proposed to the Germans not to demolish the buildings destroyed by the Allied bombing during the Second World War but to leave them standing as a “cultural memory” or rather “urban scars” to be left bleeding on special occasions…

Here, then, is a typical characteristic of the Balkanologist: the desire to crystallize a territory and a population into a narrative from which they cannot and must not leave.

The anthropologist or the sociologist must necessarily find some “backward” community on which to develop their studies to ensure a chair. The left-wing economist must see the economic backwardness validated because of the neoliberal policies. The missing historian goes in search of Tito’s monuments, reconstructing a mythical Yugoslavia, in which the modernist’s findings mix with his ideal political aspirations. The international aid worker hopes that some social drama will explode and that new projects will be financed to bring relief and development to such unfortunate and backward peoples.

The freelance journalist or the long-time correspondent hopes to find street clashes, coups d’état, political assassins or chilling stories in order to write articles or stir dramatic narratives that guaranteed him visibility and a fixed placement in the 1990s. The daring tourist ventures into these wild lands, with patched-up buses that never pass (not even if we were in Rome), a local population that speaks incomprehensible idioms and not a word of English, with impervious roads and maybe with signs only in the Cyrillic script.

Yet they are “magic”, “enchanted” and “fairy-tale” lands, with the very ancient and naturally troubled history, where witchcraft legends and anecdotes of communist mythography are swarming.

The soundtrack of these paths born from stereotypes in anxious search for confirmation includes trumpets, timpani, mystical vocals and electric guitars, a music often reconstructed to meet the expectations of Western listeners by gifted musicians as smart as the Serbian Goran Bregovic and Bulgarian Ivo Papasov, which has little to do with the music that is really listened today in the Balkans.

Of course, in Serbia the trumpet festival in Guca remains an event frequented by many foreigners, as are the pop festival EXIT in Novi Sad and the jazz festival Nishville in Niš. In Bulgaria and Romania, the main summer festivals, such as Untold in Cluj Napoca or Summer Well in Buftea or Varna Beach, are dedicated to electronic and indie music, not to choirs or lullabies for improvised ethnomusicologists.

But the idea is that the music of the Balkans must necessarily be ancient and primordial, but strident with the western ear just that little to make it playable even on the radio. Even the Italian left-wing radio stations, when covering the Balkans, tend to include the traditional music of Amira Medunjanin’s sevdah rather than the traditional music of the beloved Zvonko Bogdan in their playlists because the first is consistent with a certain exotic and oriental representation of the Balkans.

Obviously, journalists and left-wing scholars cannot present the Balkans except as a lost paradise, with attached nostalgia for the communist regimes where, at least in Yugoslavia, everything was cheerful, improvised parties to honour passing foreigners and Arcadian peasants playing their clarinets at sunset. The 1990s opposed the lost paradise, and a fund of ancestral irrationality unites them and explains both.

Here is a typical Balkanologist like Paolo Rumiz who writes: “I could talk to you about hatred and sabotage, refugees and Kalashnikovs; tell you about a land torn by the icy hatred of geopolitics. But I won’t. I will tell you about the sounds of a restless world, the acoustics that hide the soul of its places. My soul is full of those frequencies…” In two lines the word “hate” occurs twice. Instead of using the word murder, it would be better to use a term like „throat slitting“, because it is more reminiscent of the Grand Guignol, rooted in a barbarian and rural violence. The evocation of the wars of the 1990s is inevitable, citing refugees and machine guns. Of course, it is a restless and authentic world, where the soul is found and where Orientalism is already announced by the historical echoes of Istanbul.

And then Rumiz leaves for the tangent with the most phantasmagorical Balkanology: the Belgrader who celebrates good news in the streets with a happy procession thanks to the rakija and the Gypsy music; the primeval jungle in Montenegro; the Greek that breaks the plates in the taberna; the seductive and aggressive gypsy woman; the two hundred (!) bagpipes that meet in the uninhabited Balkan Mountains; dervishes between Albania and Bosnia; Romanian boatmen who are also, at the same time, singers and smugglers. I’ll leave it to the reader to discern how even a certain intellectuality of the left has caged their imaginary Balkans always under the canons of the magic, of the fairytale, of the irrational.

Yet it makes us reflect on how this imaginary Balkans fascinate even the most extreme right, always on the basis of that ancestral, mythopoietic authenticity, which seems almost mirroring the Nordic stories that fueled the imagination of contemporary neo-fascism. Serbia has a privileged place in this perspective, seen as a country with the people who do not bend to the dictates of globalist imperialism and orthodox bulwark against the Islamic invasion (while ignoring the billions of dollars that the Arabs are investing in Serbia). It’s not a coincidence that Casa Pound is in the front row to help the “heroic” Serbs of Kosovo, guardians of the Orthodox identity in the sea of Islamic Albanians. According to Matteo Salvini’s recent tweet dedicated to Sinisa Mihajlovic’s disease, the Serbs (by extension) are warriors, honest, loyal and with a sense of honour: positive attributes certainly, but proven how?

But the Balkanologist does not care about explaining, because for him the Balkans is a prism in which everyone recognizes their ideals, their dreams, their illusions.

This summer, the streets and cities in the Balkans are criss-crossed by aspiring Balkanologists, (recognizable by the backpack full of all kinds of goods to face famine and natural disasters), who will stop to talk with the locals in search of confirmation of their prejudices; and a farmer in Banat, a pensioner in Bitola or a student in Sofia will answer their questions with a smile, sensing their condescension and mocking the illusion of understanding their difficult lives through a week of travel, three books and two glasses of rakija.