This is the second article in our series about zero-emission tourist attractions in Serbia which will be liked by the fans of history; the Roman one in particular.

Before we begin, we just want to say a few words about zero-emission tourism. This is a new, environmentally conscious brand of tourism where you (the tourist) can directly help with preserving unspoiled biodiversity hotspots, reduce your carbon footprint, protect the environment, and positively contribute to maintaining the delicate balance in the nature.

So, onto our journey back to the Roman times…

The “love affair” between what is today’s Serbia and the Roman Empire dates back to 27th year B.C.E. when Serbia was considered the Empire’s east border, on the river Danube. A total of 17 Roman emperors were born here, and the traces of the once mighty Roman Empire, which dominated this area from 27th year B.C.E. to 476th year AD, could be found throughout country, particularly in today’s Sremska Mitrovica which, back in the Roman times, was called Sirmium.

We are bringing you the three most interesting and most visited ancient Roman sites in Serbia today.

1. Royal Palace in Sirmium (located near Sremska Mitrovica) – The Sirmium archeological locality lies on the southern slopes of the Fruska Gora in Srem County, Vojvodina, close to the town of Sremska Mitrovica. Sirmium was located on the main Roman road that connected the east of the Empire to its west, and was the birth place of Roman emperors Trajan Decius, Aurelian, Maximianus Herculius, Flavius Gratianus, Constantius II and Claudius II Gothicus. From the 1st to 4th century AD, the town was an important administrative and economic centre of the Panonia Secunda province, and a military stronghold which the Romans used in fighting brutal Barbarians from the north.

Although some of it was destroyed in the vicious attack by the Avars in 582 AD, there is still plenty to see here.

Sirmium had everything that a Roman town should have had – the Imperial Palace, adjacent circus, public buildings, Licinian baths, a granary and commercial areas. There were luxury residences and even multi-storied buildings called insulae. The town was protected by thick walls and supplied with water via an aqueduct from one of the springs on the Fruška Gora Mountain. The town streets were paved and flanked by porticoes. There was even a functioning sewer. Local coins were made in the town’s mint while artisans made objects out of precious metals, glass and clay. One of the more magnificent structures here was the shrine dedicated to Jupiter, the Roman god of light and sky.

2. Viminacium (located near Kostolac) – Viminacium was the capital of the Roman region known as Moenia Superior. It is believed that it had a population of about 40, 000 which would make it the biggest town in the region. In the last three or four decades, archeologists found here the remains of the well-preserved city and the entire “city of the dead” with 14,000 tombs. 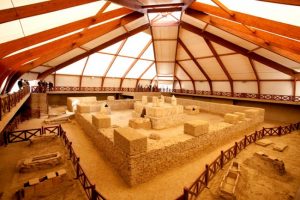 Viminacium was also one of the most important Roman military strongholds from 1st to 4th century AD, as well as a permanent military base of the famous Legion VII Claudia Pia Fidelis (Claudius’ Seventh Legion). This legion was one of the two legions used in Caesar’s invasions of Britain, and played a crucial role in the Battle of Pharsalus in 48 BC. It existed until the end of the 4th century, guarding the middle Danube. Viminacium was often chosen as a military base and the starting point in numerous wars. Since the town was located in the plain, close to the Iron Gate (Gvozdena Kapija) on the Danube River, it was ideal for grouping of large military forces.

During Hadrian’s reign, the civilian settlement next to the camp acquired the status of a municipium, a town with a high degree of autonomy. 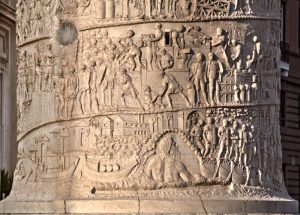 During the reign of Gordian III, the city acquired the status of a colony of Roman citizens, and the right to mint local currency. An amphitheatre, monumental buildings and traces of developed infrastructure can be seen in and around the site.

Viminacium was destroyed by the Huns in 443 AD, and it was never rebuilt.

3. Felix Romuliana (located near Zajecar) – The Imperial Palace here was built by Emperor Galerius, in late 3rd and early 4th century AD. The palace lies in a picturesque valley near the Black River (Crna Reka), in a hilly area just outside the town of Zajecar, in eastern Serbia. Felix Romuliana is also called the Gamzigrad Complex, and it is probably one of the most well-preserved ancient localities in Serbia. 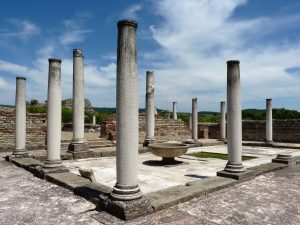 Galerius, who subsequently became the Emperor of Rome and a divinity (293 – 311 AD), was     born in 250 AD in the province of Coastal Dacia, in a place “not too far from Serdica”. Galerius was a personable, robust man, an epicure and an extremely brave soldier, devoted throughout his life to his step-father Diocletian, who was founder of the Tetrarchy, strongly connected to his native land, fellow countrymen and relatives and, above all, to his mother Romula, who was “an ardent devotee of mountain divinities”, and a sworn enemy of Christians. 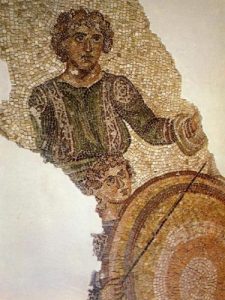 The lavish palace in Felix Romuliana is decorated with superb mosaics, frescoes and precious statues. In 2007, Felix Romuliana was included in the UNESCO’s World Heritage Sites list.