A celebration of the Day of the Italian Republic, held the day before yesterday in the Italian Embassy’s gardens in Belgrade, was a farewell and an expression of commitment in one. 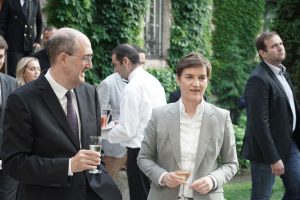 The departing ambassador Carlo Lo Cascio gave a welcome speech and greeted all the guests including Prime Minister Ana Brnabic, while reaffirming Italy’s commitment to “helping the Western Balkan countries to expedite their path to European integration because, now more than ever, it has a strong raison d’être. The Ambassador also said: “As PM Draghi said, the process of enlargement does not represent a threat to the resilience of the European project, but rather is part of its full realization.”

In front of more than 400 guests, including singer Konstrakta and Andrea Pirlo (mentor of the 2022 Italian camp for young Serbian soccer players promoted by Banca Intesa Beograd and Generali Osiguranje), Ambassador Lo Cascio recalled that “Italy has always supported the legitimate European aspirations of Serbia and the Balkan region, whose future unquestionably lies in the EU. For this reason, we would like to encourage Belgrade to continue on the reformist path that it has embarked on in recent years. To make this prospect more concrete, it is necessary for everyone – Serbia, the European institutions and individual member states – to do their part.”

Drawing on his long professional and personal ties with Serbia, Ambassador Lo Cascio gave his guarantees that, whatever job he takes on next, he will remain a friend of the country and a staunch supporter of its path to European integration. He also said that Italy intended to continue promoting “the idea that EU membership becomes a shared goal, the heritage of all: government, opposition, civil society, citizens. Only through a genuine common afflatus will Serbia be able to move more expeditiously toward formal entry into the big European family.”

Among the many guests at the Embassy were also the Speaker of the Serbian parliament, Maja Gojković, the head of the EU Delegation to Serbia, Emanuele Giaufret, numerous ambassadors- including the American and German ones, military attachés, political, economic, business, scientific, and cultural figures, and representatives of various religious denominations. Also present were some opposition politicians.

The Italian Foreign Minister Luigi Di Maio’s upcoming official visit to Serbia, the last legacy of Lo Cascio’s intense diplomatic activity, will further boost ties between the two countries and will be the highest endorsement of the continuity of Italy’s diplomatic action, which is the continued support of Serbia, especially after the end of the Merkel era in Europe.