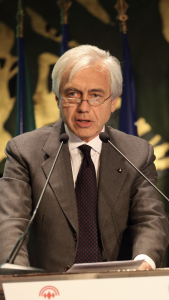 Your Excellency, perhaps not all our readers are familiar with the extraordinary history of the Sovereign Military Order of Malta (SMOM) and its current activities. What are the values that the Order adheres to in the contemporary world?

The Sovereign Order of Malta is one of the oldest institutions of Western and Christian civilisation. The Sovereign Order of Malta has been a lay religious order of the Catholic Church since 1113 and is a subject of international law; it has diplomatic relations with more than 100 states and with the European Union and has permanent observer status at the United Nations and at the Assembly of Mediterranean Parliaments (in which Serbia also participates). It is neutral, impartial and apolitical.

In the 120 countries where the Order of Malta is present, it provides assistance to people in need through its medical, social and humanitarian activities. On a day-to-day basis, through its wide range of social projects, it provides constant help for those who are forgotten or live on the margins of society.

Even in this complicated period marked by the Covid-19 pandemic, your Representation’s commitment to the Make a WISH initiatives has not waned. Could you elaborate?

Our almost thousand-year-old mission of helping those who suffer gained importance even more in this last period. We had operational difficulties in managing every single campaign, including overcoming bureaucratic difficulties in getting some masks for assisted breathing into the country, donated by an Italian family last June 2020, which were necessary for the most serious cases of Covid. We have also thought about the fundamental phase of prevention. A disinfection “tunnel” was provided under the auspices of the Make a WISH to the Order of Malta project and was donated to the Hospital for Psychiatric Diseases in Kovin in November 2020. Naturally, the masks played a key role in prevention, so Make a WISH supplied the Children’s Shelter in Belgrade, St. Petka Institute in Izvor, the Archbishopric of Belgrade and other Catholic and Orthodox churches, and the Clinical Centre in Niš with a thousand washable multi-purpose masks.

You have been representing SMOM in Serbia since 2010 and are the longest-serving diplomat in the country. What changes have you noticed in the country during these years, also in relation to your assistance activities?

Serbia is an interesting country with deep roots in history and has gone through a lot of difficulties. Getting out of it is a long and delicate process, but one that I see underway. I think only of the Belgrade skyline, how much it has changed in recent years, and for me, seeing a crane on a building site means jobs not only for the construction workers, but also for those who manufacture or sell furniture, kitchens or televisions. I think of the interest shown by foreign companies in coming to Serbia to engage the quality workforce on offer.

What is the current situation of inter-religious dialogue in Serbia?

I do not feel qualified to answer such an important question. Within the framework of our activities, we try to foster this dialogue in every way. I remember a few years ago, when we started with the ‘Make a WISH’ project to help the Saint Petka Institute in Izvor, which houses about ninety girls with psychological and physical problems, we were asked if we knew that the Orthodox nuns were running it. Well, of course we knew, but for us it was not a discriminating factor in choosing whom to help. In fact, I remember that the Order of Malta is dedicated to the protection of human dignity and the assistance of all those who need help, regardless of their origin or religion.

Once the acute phase of the pandemic is over, what challenges does the Order intend to tackle in Serbia? 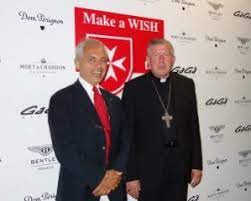 We now have in mind a great “WISH” aimed at young people. This time around, we will not only think of those young people who are suffering – either because of socio-economic or health conditions – but we will think of what the young people of today must be able to do to face the challenges of the future. We think that, on their life path, they should engage in the world of sport and physical activities, in general, not only to improve their overall health, but also to teach them about the concept of the “group”, about positive interests and ultimately to get them off the streets. If we succeed, and for time being, I have to say “if”, it will be thanks to numerous donors from different countries, the Catholic Archbishop of Belgrade His Excellency Most Rev. Stanislav Hocevar,  who gave us this idea,  and a Mayor of a major Serbian city who is working to find space for the construction of a multi-sports field.

Which city and when?

Can I use my right not to answer that question (out of superstition)?! 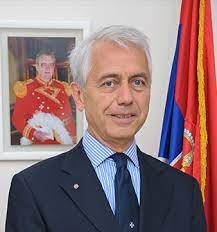 Alberto Di Luca has been Ambassador of the Sovereign Military Order of Malta in Serbia since 2010. He has held top positions in the luxury watchmaking sector and is now a senior partner in an executive search firm focused on the luxury, transport, communications and IT sectors. A Member of Parliament from 1994 to 2006 and President of the Shengen and Immigration Bicameral, he has been a Knight of Magisterial Grace of the Sovereign Order of Malta since June 2014, while in July 2017, he was awarded the Grand Cross of Merito Melitensi of the Sovereign Order of Malta. In 1986, at the Quirinale, the President of the Republic awarded him the Gold Medal for Athletic Valour for having won a World Motorboat Championship (Offshore speciality).