The relationship between Carla Bissi-Alice and Franco Battiato was not a typical one that usually connects a musical author and interpreter of his songs.

Since the 1970s, they have together embarked on a path of musical and inner refinement that has brought them to the top of Italian pop music in the second half of the 20th century. Alice has been a colleague, pupil, friend, confidante, and singer of Franco Battiato’s songs, who is the most multifaceted and spiritual Italian singer.

Her renditions of the Maestro’s masterpieces remain the result not only of continuous work on voice and sound but of study and meditation that have united two souls in research for decades. If interpreting a song also means understanding something beyond the author’s intentions, then listening to Battiato’s songs sung by Alice will take you beyond the lyrics and the score. You will grasp notes, silences and pauses that open to new emotions hidden in songs that all Italians know. 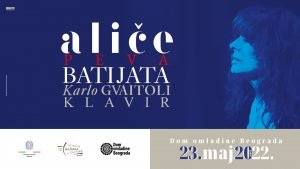 For the international community living in Belgrade, the concert, organized by the Italian Cultural Institute, is a unique opportunity to retrace the musical world of an artist who has constantly explored the cultures of the world. The non-Italians attending the concert will be amazed by the endless quotations that will touch even their own language and culture. Battiato studied Arabic culture from a young age thanks to a great friend and Sufi master, just as, in the last phase of his life, he turned to the study of Buddhism and bar do, the threshold between death and rebirth described in the Tibetan Book of the Dead.

Certain lyrics that at times may seem recondite, provocatively cryptic or nonsensical, are actually meant to provoke the audience to step out of their comfort zone of ordinary and therefore sterile mental and musical associations, an approach this is typically taken by Gurdjieff. An Alice classic such as Chanson Egocentrique boasts the lyrics of Henri Thomasson, the greatest promoter in Italy of the works of Georges Ivanovic Gurdjieff. There is no Italian, even far from Battiato’s world, who has not been enchanted by the lyrics of The Cure, written by philosopher Manlio Sgalambro. It is a world that does not distinguish between the sacred and the profane, because literature is a form of the absolute, and the mystical afflatus has produced extraordinary literary masterpieces. Thus the poet Fleur Jaeggy and the monk Juri Camisasca have both offered Battiato and Alice lyrics for songs such as  The Eagles and Nomads. 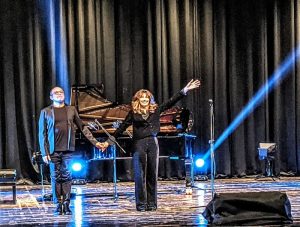 The concert on Monday, May 23, will be neither lecture nor experimentation – on the contrary, the words, Maestro Carlo Guaitoli’s piano, and the melody of Alice’s voice will take the audience to distant worlds, namely those of their own inner selves.

The concert ALICE SINGS BATTIATO will take place on Monday, May 23 at 8 p.m. in the Great Hall of Dom Omladine, Makedonska Street 22.

Tickets can be bought here.