The 1990s – also known as the decade of wars, repression, hyperinflation and protests – is documented through a young man’s eyes in a new photo exhibition by Serbian photographer Srdjan Veljovic.

Photographer Srdjan Veljovic says he is trying to tell a personal story about the upside-down reality of 1990s Serbia with the selection of photos he chose for his exhibition about the decade, which opens on Thursday at the Belgrade Cultural Centre.

Veljovic told BIRN that he is a member of the generation that was in its early twenties at the beginning of the decade that he documents. “Those were the best years of my life. Due to the circumstances, I photographed the life that was happening around me a lot without any special intentions,” he says.

The 1990s, seen through a lens, was a very productive decade in Serbia, for a photographer at least. “All these kinds of dislocation – a step away from what is recognised as normal – offer you possibilities. You have a great wealth of variety from this very strange situation,” Veljovic explains.

He says that at that time, he saw the situation as normal, but it is now clear that reality had been turned completely upside down. The exhibition, he suggests, is about the desire and effort to establish a space of normality and freedom in a troubled country under the rule of Slobodan Milosevic and his Socialist Party of Serbia.

Under Milosevic’s rule, there were wars in Croatia, Bosnia and Herzegovina and Kosovo, and the decade came to a close with NATO bombing Yugoslavia.

Milosevic resigned after massive demonstrations in 2000 and then was arrested and extradited to the UN court in The Hague to stand trial for war crimes. Veljovic said he returned to his archives and tried to find a narrative which would bring meaning to his selection while also referencing the wider social circumstances.

“Very often it is about small subversive actions,” Veljovic explains. He adds that although the exhibition photos are very diverse, they mainly cover two topics – the Yugoslav People’s Army in the beginning of the 1990s, and the NATO air raids in 1999.

“I have various situations concerning sociability and subjectivity between these two periods. The first is the Serbian techno [scene] of the 1990s, and I have some situations relating to turbo-folk [music],” he explains. 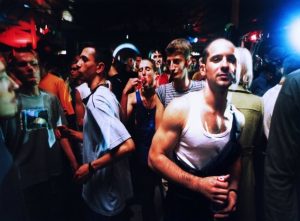 Techno and turbo-folk (an upbeat pop version of traditional Balkan music) were seen as opposite poles of the cultural and political spectrum among young people in the 1990s in Serbia.

Veljovic’s images from a floating nightclub on the Sava river to a traditional folk celebration at Belgrade’s Kalemegdan fortress are happy pictures, despite the political climate at the time,  “because this kind of activity was very important in order for people to survive another part of life that was very complicated”, he explains.

At the time, he didn’t work for money, but for his own enjoyment, and the only trouble he ever encountered was when he took pictures of a bridge across the Danube in Novi Sad which had been bombed by NATO in 1999.

“We were detained and interrogated, because we were not allowed to take photos at all”, he recalls.

Although, the period covered by the exhibition was also the time of bitterness, Veljkovic says that he tried to show the brighter side too.

“Coincidentally, some of my personal emotions from that time are beautiful, because more or less beautiful things happened to me then,” the photographer says. Despite their problems, people’s social life in the 1990s in Serbia was more exciting, before it moved to the virtual sphere, he argues.  “Then people lived more in a more social way,” he remembers.

‘The Nineties’ is open from February 9 to March 9 at the Artget Gallery, Belgrade Cultural Centre, Knez Mihailova 6, Belgrade.